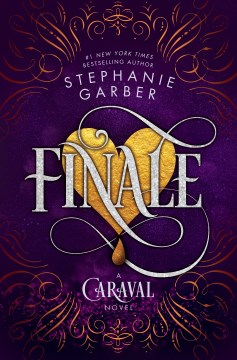 Its been two months since the last Caraval concluded, two months since the Fates were freed from an enchanted deck of cards, two months since Tella saw Legend, and two months since Legend claimed the empires throne as his own. Now, Legend is preparing for his official coronation and Tella is determined to stop it. She believes her own mother, who still remains in an enchanted sleep, is the rightful heir to the throne. Meanwhile, Scarlett has started a game of her own. Shes challenged Julian and her former fianč, Count Nicolas dArcy, to a competition where the winner will receive her hand in marriage. Finally, Scarlett feels as if she is in complete control over her life and future. She is unaware that her mothers past has put her in the greatest danger of all. Caraval is over, but perhaps the greatest game of all has begunwith lives, empires, and hearts all at stake. There are no spectators this time: only those who will win...and those who will lose everything.
Publisher: New York : Flatiron Books, [2019]
Edition: First U.S. edition
Copyright Date: ©2019
ISBN: 9781250157669
1250157668

Okay, so this entire book was just a crazy roller coaster. Like seriously. The ending is just (makes futile gestures and noises).

Was there a ridiculous amount of love triangle in this book? Yes. I did not even consider Scarlett's love triangle but Tella's was interesting as it was mixed in with the power dynamics and fight to save the world from being ruled by the fates.

There was also a smidge of time travel which was interesting. Well the whole book was interesting or maybe it is also accurate to say the whole book was a plot twist. It's like Stephanie just went, what if I picked up on that tidbit that we've left open, or what if I just threw this into the mix? This book did very well as closing quite a few loose threads, some you didn't even realise were loose!

Finale goes through the journey of Donatella and Scarlett as they try to save the Empire and their friends from the fates that have now been freed. You follow them as you learn new secrets and see sacrifices, but this time in a new setting outside the game of Caraval. We learn about the past, present and future throughout the novel. You meet some new characters, some who live very simple lives and some with a very interesting backstory. I enjoyed reading this book and following Tella and Scarlett through another breathtaking adventure, and learning even more about them throughout the story. I found the main obstacles and adventures very intriguing and thrilling to read. It truly felt as though I could almost be in the book and on the adventure with the characters. I believe it was an amazing way to finish up the Caraval trilogy. Since I enjoyed the book significantly I rated it 5/5 stars. - Kailey, 14, SAPL Read It & Review Contributor

The last book of Stephanie Garber’s "Caraval" series, “Finale” follows the Dragna sisters' final journey as they attempt to stop the Fates. The whole concept of Caraval is just thrilling, and Stephanie Garber just keeps on adding more exciting ideas to it. The only thing I found as an issue was that sometimes the author would mention things repeatedly. The series was wrapped up nicely, but I feel that there could have been more done with the ending. It didn’t have that Caraval flair to it. But I did love the growth in all the relationships and characters. Legend especially is such a charming character, but he’s definitely come a long way from the first book. Everything was so detailed, but I found it a bit disappointing that Stephanie Garber didn’t add more backstory to the Fates. The emotion in this book is incredible, each page makes you feel a different emotion. Overall, it was a captivating book, with lots of betrayal, heartbreaking moments and, of course, magic. I would rate this a 4 out of 5 stars. @India_ink of the Teen Review Board at the Hamilton Public Library

I was honestly expecting a little more. Legendary was so much better. I didn’t enjoy parts of the plot and the last 50 pages were probably the worst. The plot isnt well organized and a lot of the events are repetative. I was really hoping for a better ending to this series.

You thought these books couldn't get better, but they do. This book is an amazing rollercoaster of emotions that leave you confused, conflicted, heartbroken, and in love all at once.

The last book in a wonderful series! My favorite series by far.
I highly recommend these books. Kept me interested and wanting to hear more.
I can't wait to read more by this author.

"Every story has four parts: the beginning, the middle, the almost-ending, and the true ending. Unfortunately, not everyone gets a true ending. Most people give up at the part of the story where things are the worst, when the situation feels hopeless, but that is where hope is needed the most. Only those who persevere can find their true ending."

The most magical and unique series of all time has come to a close. I am not sure if I'm sad it's ended or happy that the story is finally complete. I fell in love with this series back in 2016, and the previous 2 books were everything I had hoped they would be.

This book is told in the alternating perspectives of sisters Scarlet and Tella. Each have their own missions to accomplish and though they each want to protect the other sister, they must go their own way so that they can come together to defeat The Fates.

There were many new characters introduced in this third installment, and most were Fates we had never previously even known about. Some are friend and some are foe, but it was a interesting cast of characters to say the least.

Learning the history of all the fates, how Tella and Scarlet's mom falls into the mix, and even background on how Legend came to be was an exciting and at times terrifying journey. Author, Stephanie Garber, throws in some twists and turns that I honestly didn't see coming.

I had high hopes for the Caraval series ending and I have to be honest and say it fell a bit flat for me. The ending was just "okay" and it seemed really rushed and too tied up in a neat little bow for my liking. Sure, part of me was happy that the fairy tale ending happened, but it left me feeling empty... I am not sure how to further explain the feeling and I don't want to ruin this book with spoilers.

All in all, it was a book and series I will read over again because it's just that creative, well written, and the characters are unlike any other. Bravo!

Thanks to Netgalley, Flatiron Books and Stephanie Garber for allowing me an eARC to read and give my honest review. It was a 4 star read for me! I can't wait to see what Garber comes up with in perhaps a new series!

Boekwurm_1 thinks this title is suitable for 13 years and over

Ravindersidhu thinks this title is suitable for 13 years and over