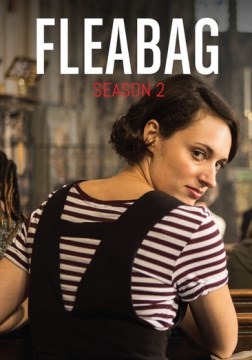 How old are you?
-Fifty-eight, and you?
Thirty-three.
Oh. Well, don't worry. It does get better.
-You promise?
I promise. Listen, I was in an aeroplane the other day and I realised... well, I-I mean I've been longing to say this out loud, so... Women are born with pain built in. It's our physical destiny. Uh, period pains, sore boobs, childbirth, you know. We carry it within ourselves throughout our lives. Men don't. They have to seek it out. They invent all these gods and demons and things all so they can feel guilty about things which is something we do very well on our own.

And then they create wars so they can feel things and touch each other and when there aren't any wars, they can play rugby. And we have it all going on in here, inside. We have pain on a cycle for years and years and years. And then, just when you feel you are making peace with it all, what happens? The menopause comes. The fucking menopause comes, and it is... the most wonderful fucking thing in the world. And yes, your entire pelvic floor crumbles and you get fucking hot, and n-no one cares but then... you're free. No longer a slave no longer a-a machine with parts. You're just a person, in business. Oh. I was told it was horrendous. It is horrendous, but then it's magnificent. Something to look forward to.

Women are born with pain built in, P 3 of 3:
You better get back to that party. Your party. ... Mm. It is not a party until someone flirts with you. And that's the only really shit thing about getting older is that people don't flirt with you anymore. Not really. Not with danger. I miss walking into a room and not knowing and there's a sort of energy, a dare. And do not take that for granted. There is nothing more exciting than a room full of people. Yeah, except most people are...
-What?
Shit.
-Oh.
Look at me. Listen. People are all we've got. People are all we've got, so grab the night by its nipples and go and flirt with someone.

I read your book.
- OK, great.
Well, it's got some great twists.
- True.
Uh, but I just, I couldn't help but notice...
- Come on, just spit it out.
...just one or two little inconsistencies.
-OK, sure.
So, the world was made in seven days and on the first day, light came and then, a few days later, the sun came. Yeah, that's ridiculous. But you believe that.
-But it's not fact. It's poetry, it's moral code. It's for interpretation to help us work out God's plan for us.
What's God's plan for you?
-I believe God meant for me to love people in a... different way. I believe I'm supposed to love people as a father.
We can arrange that. A father of many. I'll go up to three.
- It's not gonna happen.
Two, then.

You go in there, I go in there.
-And you make me tell you all my secrets so you can ultimately trap and control me?
Yeah. No. You tell me what's weighing on your heart and I listen without judgment and in complete confidence.
-Sounds dodgy.
I just listen. At the very least, it'll shut me up for a minute.
-I'm not Catholic.
Tonight, that doesn't matter.
-Won't I catch fire or something?
If you did, it would confirm my faith, so let's try it.
...
Well, I've stolen things. I've had a lot of sex outside of marriage. And once or twice inside someone else's. Uh, there's been a spot of sodomy. Then, much masturbation a bit of violence, and of course the endless fucking blasphemy.
And?
-And...
Go on.

I sometimes worry that I wouldn't be such a feminist if I had bigger tits.
-Well, it's good you felt something.
===
I think there's something humbling about funerals.
-Really?
Yeah, it's good to dwell on the next life.
-You really think there's a next life?
What do you believe? Worm food?
-Why what?
Why would you believe in something awful when you can believe in something wonderful?
-Oh, don't make me an optimist. You will ruin my life.
===
What do guinea pigs do?
- Um, they are born they shit themselves with fear, and then they die.
===
Gosh, grief clearly agrees with you.
===
she... she just knew how to be fun. How to be kind. She just knew. I'm just guessing.
===
I don't know what to do with it.
-With what?
With all the love I have for her. I don't know where to... put it now.

Fleabag overcomes over the hot Priest:

I've got two important meetings and I look like a pencil.
-No! Don't blame me for your bad choices. Hair isn't everything.
Wow.
-What?
Hair is everything. We wish it wasn't so we could actually think about something else occasionally but it is. It's the difference between a good day and a bad day. We're meant to think that it's a symbol of power that it's a symbol of fertility. Some people are exploited for it and it pays your fucking bills. Hair is everything, Anthony!
===
He's gonna make a bassoon joke. Is that a bassoon in your hand or are you just pleased to see me?
-Would you say that to your son?
When he has his bassoon, sure. But... He's never pleased to see me, so... It doesn't even make sense. Why would a bassoon in my hand...

season 2 is even more funnier than season 1 - fantastic ... original ..

Luv and agree with all the comments. Just wanted to add my appreciation of the appearance of the fox near the end. Brought to mind a wonderful novel called "Happiness" by Aminatta Forna. Check it out.

Luv Brit TV. This show and The End of the F'ing World are 2 of the best 1/2 hour dramedy series of all time, IMO. Both with limited 2 series runs, both ending perfectly. Hope to see more from all concerned.

Absolutely loved this series - she is just brilliant - the cast was perfect.

"This is a love story" says fleabag to the camera. Really it is. Episode one gives a fast, under two minutes of helpful recap of season one before introducing a "hot" priest who would become fleabag's love interest in this new season. As in S1, fleabag's private commentaries with the camera are well put and entertaining. The materials and characters are offbeat and interesting as well. Bonus is that there are "less" raunchy scenes and filthy language, though no subtitles, only with captions.

Brilliant writing and a real life perfect ending to one of the best.
The scenes with her Dad are extraordinary and the chemistry between the priest and herself are a joy to behold. It made me fall in love with them! Olivia Coleman’s character reminds me of so many pretentious people I have encountered in my life. What a great performance. I hope this amazing talent Phoebe Waller Bridge will do something else with her genius for us in the future.

if you liked season 1, you'll like this too. difficult for some, but i find her a breath of fresh air.
there will be no more seasons after this one. she actually tells us this at the end, but you have to watch closely.

I enjoy this show so much. It's witty, entertaining, the writing is smart and on point and personally for me, I was able to take a way a deeper meaning from each episode.

This show is like therapy for me but with a really funny and somewhat total mess of an English woman. :D

cathy1450 thinks this title is suitable for 18 years and over