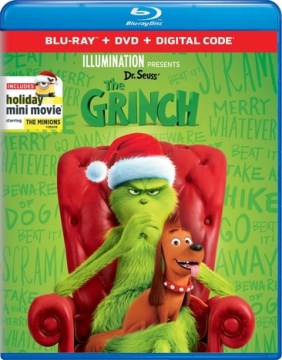 Aweful movie. Where is Cindy Lou Who's dad? So we are supossed to believe the grinch hooks up with a single mother and wants to be a parent to these kids in some weird family.... This movie is nothing like the orginal story except for the iconic song lyrics and his faithful pet dog.

WAY underrated movie. I liked the story and the visuals. It adds to the story, bringing new stuff viewers haven't seen, while still feeling like a Dr. Seuss movie. Watch it, you won't regret it.

My kids love this version.

I am not a fan at all. They tried to make him "real" so, he's a depressed person, dealing with a tough past and flashbacks.

My kids loved this Christmas movie. We watched it several times and will be adding it to the movie list for next year.

My FAVORITE Grinch movie ever!!

A beautifully animated version with a unique twist on the story.

this is a great movie for little kids.

In this version of the Grinch, it portrays him as being a person who no one really interacted with. Unlike another popular version; How The Grinch Stole Christmas, the people who live in Whoville aren’t scared of him but rather at most times forget he is even there. The background story of the Grinch is different and very much relatable than the other Grinch movies I have watched. In this movie he is shown to have to soft spot for families because he never had one. He grew up alone in an orphanage and therefore decided to be alone for the rest of his life, until a little girl who lived in the town; Cindy-Lou Who touched his heart with her kindness and thoughtfulness. I would definitely recommend this movie to everyone as the sound tracks of the movie was great and overall everything was too. 5/5 stars
@Bunny365 of the Hamilton Public Library's Teen Review Board

The Grinch hates the cheerful festival of Christmas that happens every year in Whoville, so he decides to steal it from them because of what happened in his past. I loved this movie because it was funny, cute, and heart-warming. I have not watched the live-action Grinch movie, which is mostly preferred by everyone, but I believe this animated version is beautiful because of the storyline displaying The Grinch’s sad past relating to his present nature and behaviour. The ending was special and heat-felt because every who forgives and accepts Mr. Grinch even if he was mean. My favourite character was Max the dog because it was cute to see him be loyal and help The Grinch even if he is the “villain” of the story. Overall, I think ‘The Grinch’ is a beautiful and amazing movie to watch during Christmas time. 5/5 -@LibbyTeen of the Hamilton Public Library's Teen Review Board

The Grinch is Christmas film based on the book How the Grinch Stole Christmas! by Dr.Seuss. This version I enjoyed because it made Grinch more personable... But for the same reason, I didn't like this version either. I watched this movie in the theater and I fell in love with it. It is a remake of the original, with its own modern twist. I like the old and the new version equally! It is about a grumpy Grinch plots to ruin Christmas for the village of Whoville. I love the whole plot, the theme and everything about the movie. This had the most sweetest ending to it, heart-melting. My favourite part would have to be the ending because of how much heart-melting it was. I would recommend this movie for people of all ages because I know everybody will love it! If you like the classic one you might the modern one as well. Overall, this is one of the best movies to watch on Christmas, It is amazing! 5/5.
@TheBookWorm of the Hamilton Public Library Teen Review Board

I have to agree with the most of other commentators, this re-make is a farce and completely unnecessary. Just because it's the director of Despicable Me, I guess he's given free rein. After this mess, I hope they're smart enough to reel him in. I wouldn't want him thinking he could do 12 Angry Men with the Minions next. Ouch!

Wasted Cumberbatch's talent. Remakes are more successful when they change the story to fit the acting talent. Worth watching once just to confirm for yourself that this is disappointing but it won't do well as an annual Christmas TV special - I won't watch it again. The tunes wouldn't be fun to sing.

Monica_Diana_Czekirda thinks this title is suitable for All Ages

yellow_zebra_264 thinks this title is suitable for All Ages

when she went to pick up her friend he slide down a branch with his mathbook ad landed on her bike and droped the book i said what hes not talking his mathbook thats weaird when she said won't the surp just freeze i said i never knew that i think i said i made a ginger breadhouse with my brother in 2012 2015 we did a frozen ginger bread house and 2020 after christmas another gingerbread house when he was talking about the ginderbread house he seeed so intresting then he said dum so so stupidly dum they laughed then they laughed how he was talking about santa he said its the mating call of the raindeer but instead was a ghoat and everyone laughed cause it was a reindeer goat people laughed it screamed at the Grinch they laughed when he said strange goat south for the winter reminds me of Winnie the Pooh: Seasons of Giving I said in theatres I think people laughed when he told him to go away go back to your goat farm go eat your can when he said we'll have 100 reindeer to pull our then the goat screamed again a lady laughed again and she said crazey goat then she laughed that all of them were gone well santa had eaght it looks like he ate the other seven a lady laughed we thought it was funny too he thinks it grass but its his hair as he was bitting he got mad and poped out i think they laughed when a man thought mable the dog had learn to use a doorbell but it was a grinch really i think they laughed when the dog went flying into the house and was holding the cake and a drinkout to the man he thought she got it for him i think they laughed at how they went riding on a slead with fake raindeer and they laughed that the raindeer wanted to sleep with him he asked if the dog teach him puppy eyes and he was doing it too then he let them slep with him but just one night just like lady and the tramp he said but remeber just for the night and she slep with them forever they laughed how he jumped on the bed when the reindeer jumped onto the coffee maker people laughed when Max wanted sausages they laughed he crashed into him he said oh look its me oh deer when he said fred i didn't know whos fred and they laughed that he had whip cream coming out his nose and inside they lauhed the raindeer took a coofie i didn't know it was a cookie covering him i just noticed last minete he said he is a engin in this great machine to fred people laughed oh i didn't know that was her he was talking too and i said oh she's getting up they laughed that he fell in the snow but slowly he got up they laughed he poured milk to a guy and he said thank you mommy and people laughed that the goat screamed the end