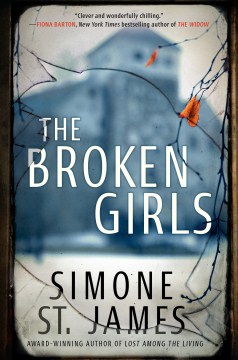 This was the right book at the right time for me. It was a quick, interesting and easy read.

I would put this in the “meh” category. Mostly because the relationship between Fiona and Jamie was very cheesy and inauthentic. The author tried hard to make it a “cutesy” relationship, but it was too plastic.

The other issue I have with this book is that a journalist is the central figure to all those involved with past crimes. You would think most of this would have been channeled through the police or other authority figures, but instead the journalist seems to be the “go-to-person” for all leads.

I really enjoyed reading about the girls who attended school at Idlewood in the 50’s, so that part of the book was enjoyable.

Not a bad read, but not one I would highly recommend.

A young girl has just gotten off a bus. She has two choices. She can take the normal route or she can cut through the woods to get there faster. But cutting through the woods means leaving the safety of the main road. Suddenly she turns and sees a figure coming towards her. But how is this possible?

She was the only one who got off the bus….

Katie, Ce-Ce, Roberta and Sonia are roommates at Ildewild Hall, a boarding school for “troubled” girls. Over time they have become close friends. They bond over their painful life stories. They trust and depend on each other.

We are given insight into why each “broken” girl is at Idlewild though chapters from their perspective. We learn about their lives and what they’ve been through and about the mystery surrounding them all.

Fiona was seventeen at the time of her sister’s murder. Twenty years later, unanswered questions continue to plague her. Although a man was convicted for her murder and is serving his sentence in a maximum-security prison, he has always maintained his innocence.

And now Idlewild Hall is being restored. Why would someone bother re-building a place like Idlewild? Fiona decides to write about the restoration for the local paper. She has strange feelings whenever she is near the property and the old school. Is it possible that the rumors about Idlewild being haunted are true?

Then a shocking discover changes everything. Could there be a link between what happened all those years ago and Fiona's sister’s murder?

There are so many secrets surrounding Idlewild and Fiona is determined to find out what those secrets are. But could all of her investigating end up putting her in danger?

Moody, atmospheric read. File this one away to read on a chilly October evening if you want maximum experience. The intertwined plotlines between the Idlewild Hall girls in 1950 and journalist Fiona Sheridan in 2014 were intriguing and drove me quickly through the pages, but the atmosphere was what really hooked me in this story. Old boarding schools with terrible secrets and a resident ghost and a small town that protects its own secrets? That's what I'm talking about.

Ghosts, old boarding schools, intriguing mystery, alternating timelines and the culmination of all of these in the most satisfying conclusion I've read in a long time? Yes please.

On the surface, The Broken Girls tells two stories: one, of Idlewild Boarding School, a place for wayward girls with no where else to go, and one of Fiona Sheridan, journalist, searching for closure after the death of her sister twenty years earlier. The girls of Idlewild are just trying to survive their cruel teachers, their bleak existence, and the ghost of Mary Hand, who haunts their halls and seems bent on their destruction. Fiona, on the other hand, lives a seemingly normal life; she's dating policeman Jamie, does freelance work for a local magazine. But she is still utterly devastated by her sister's murder - her body was dumped on Idlewild property, long after the school closed. When she goes out there on a hunch one night, she discovers the school being renovated, and she begins to look into the school as more than just the site of her sister's death.

It's the connections between these two seemingly disparate worlds and the intersections between the past and the present show that kept me absolutely engrossed in this one. Other than Deb's body being dumped on the field in Idlewild, those connections are not immediately obvious, but from the moment that Fiona steps foot on the property in the early chapters, I had chills. I knew there was a connection between the girls of Idlewild and Fiona Sheridan. And my god, did I need to know what it was.

The thing that this book absolutely nails is atmosphere. It alternates between tense and wildly creepy, between heartwarming and heartbreaking, so easily that I barely noticed it until I had goosebumps all over my body or tears spilling down my cheeks. I can forgive almost anything in a novel if it nails mood, and this was no exception.

Mary Hand as a character and as a legend in this story is a true standout for me. I absolutely loved when she showed up, even if it did make me tuck myself in a little tighter and check out my window to make sure she wasn't standing there. Her story is executed so perfectly.

And the girls. My god, the girls. Sonia, Katie, CeCe, and Roberta were so wonderfully developed. They have personalities that leaped off the page, and the heartbreaking conclusion to Sonia's story actually had me in tears. That was a twist I did not expect, but it also just made a sick kind of sense, and it made me angry. The fact that things like this happened is maddening, and I love the way the girls dealt with everything. Katie is so cunning, CeCe so sweet, Roberta so unflinching, and Sonia so lovely. I miss them already.

And of course, Fiona's journalistic drive is wonderful to read as well. I think I was more invested in the 1950 storyline than I was in hers simply because of those characters, but she was also very well-rounded with interesting motivations. I didn't connect with her as intensely, but I really enjoyed her perspective as well.

This is a ghost story at its heart, with elements of mystery and suspense that ground it and make it a page turner to the utmost degree. I loved it.

It felt like a bit of a slow start for me but it picked up just fine. If you like spooky mysteries this is a page turner. Would recommend. :)

This book is a bit weird how exactly it described women and stuff. Instead of describing a 15 year-old girl as "a late bloomer because of malnutrition" instead it describes when she started bleeding and how her breasts are small underneath her cotton shirt. That makes me uncomfortable. And instead of describing the emotional bits of Fiona's relationship with her cop boyfriend, they mention the "That's when she went to his bed", and "she thought it was going to be a one night stand", and apparently the cop boyfriend already knew when he met her, who she was and she was likely to be lonely and grieving. That's so uncomfortable and NOT CUTE. It's not meh, it's not passable, it's not neutral, it's gross!! It's like the author was indulging themself as much as possible hypersexualizing it's female characters, but holding back just enough to be deemed to "not have sexual content". Not reading the rest of this book, take a hike author.

This is a solid read. The paranormal element is subtle but interesting. I found the story of the girls in the past to be more compelling than the present day but overall I was interested in both. Some plot points were fairly predictable while others had me gobsmacked. I would highly recommend this book!

Fiona Sheridan is haunted by the murder of her older sister twenty years ago, and simply cannot help herself from pondering the details of that fateful night ad nauseum. As her sister’s death anniversary comes up, Fiona finds out that the decrepit school where her sister’s body was dumped is being renovated. Little does Fiona know what other horrors haunt the halls of Idelwild Hall. The parallel stories of Fiona searching for the truth and the lives of girls in the 1950s at Idelwild Hall are griping and intense. Intricately woven together the two tales of broken girls brings to the fore front all the ills of an idealized New England town. The Broken Girls is a page turner that will keep the reader hooked until the very end.

Mya614 thinks this title is suitable for 16 years and over

Mary Hand, Mary Hand, dead and buried under land.
Faster, faster. Don’t let her catch you.
She’ll say she wants to be your friend.
Do not let her in again!