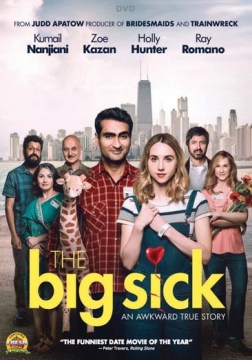 The tagline on the DVD case say that this was, "Based on an awkward true story." Oh my goodness, yes, there are so many hilariously awkward moments in this comedy, you will be glad not to be Kumail Nanjiani, who plays a lightly fictionalized version of himself. This is the story of a relationship that begins between him and a woman named Emily. It has some promise, but he keeps some very big things from her, she dumps him, then she goes into a coma.

Not a spoiler: she breaks up with him because he never told his Pakistani immigrant parents about her, and they had been trying to arrange a marriage for him and some nice Muslim girl the whole time he was seeing Emily.

Very soon after, Emily is hospitalized, goes into a coma, her parents, played by Holly Hunter and Ray Romano, fly in, and Kumail finds himself spending a lot of time with them, learning about American parents who overshare.

This film is both laugh-out-loud funny and bitterly sad, but I highly recommend it, as a story of the strange things love has us do.

I wasn't expecting this movie to be that good. I was so very wrong. Highly entertaining and enjoyable. Lots of witty banter between characters. All roles well cast and acted. Nice to see Southeast Asian characters as full dimensional people on the big screen. Bravo! I highly recommend this film.

Although not particularly funny it was an interesting movie

Charming. I enjoyed it a lot. There was way too much not-funny stand-up comedy, but I just patiently waited it out. The rest of the story was engaging.

Up there with The Notebook and LaLa Land! A love story of real life couple. Non cliche jokes, tear jerker moments. I'm a sci-fi action junkie yet, this was great time!

Ok movie, but nothing special and easily forgettable.

I actually enjoyed the family relationships more than what seemed to be an awkward romance. Watching the clash of cultures was funny and poignant.

I loved this movie so much! It is heartfelt, funny and real. It tackles big topics such as interracial relationships and family dynamics. I am not a big fan of rom-coms, and that was what I was expecting. But it was definitely not that run of the mile, typical romantic comedy -- this was an absolute gem!

One of the best romantic comedies I've enjoyed in a while. I love that it's based on Kumail's real-life relationship with Emily. The cultural and familial clash that they experienced is something that many people could probably relate too. Holly Hunter and Ray Romano as Emily's parents are brilliant.

Pretty good movie but kind of slow and boring at time!

I grew up in Pakistan. And people are always asking me, what was that like? Really not that different from here. I mean, we played cricket, which is just a spicier version of baseball. And we prayed a lot. Well, not a lot. Just five times a day. And we marry someone our parents find for us, arranged marriage, you know? But for me, it was probably that we got episodes of knight rider a little bit later. And by "little bit later," I mean we just got episode two.

I was in bed with my girlfriend and I was trying to mansplain to her that, you know, we-we are on one little rock orbiting one star in a galaxy of a billion stars in a universe full of a billion galaxies. You know, so I forgot your birthday. Who gives a shxt? Like, you are cosmically overreacting to this.
===
But yelling anything at a comedian is considered heckling. Heckling doesn't have to be negative.
=So, if I, if I yelled out, like, "you're amazing in bed!" That'd be a heckle?
Yeah. It would be an accurate heckle.
===
They called me Chashmullee.
-What is that?
It roughly translates to "dweeb."
===
We haven't even had sex again yet.
-Yeah, I'm just not that kind of girl. I only have sex once on the first date.
===
Oh. I wonder who that could be.
- Yeah.
Let me check.
- I don't know. I'm guessing it's a young, single Pakistani woman who just happened to be driving by our house, which is on a cul-de-sac.

I never knew that Pakistan had the world's largest irrigation system.
-Yeah, something like 14 million hectares are being irrigated.
===
What's the whole thing with Muslims growing beards, anyway? It's such an arbitrary thing, right? Like, who decided that, oh, we have to have beards.
-Oh. But you'll do... So, there's a billion of us and you're the only one with the truth. Is that right? So, the sun is just shining down on you right now. It's just parting.
You know, I have to tell you something, bhai.
-Here we go. Yeah.
I've been dating this girl.
-Sure.
She's white.
- Oh. I thought you were gonna say you were involved in a hit-and-run or you got caught forging some checks, but a white girl?! … Listen, I understand. You're in America, and you want to mow a few lawns and see what it's like, but eventually you have to marry a Pakistani girl.

You know what we call arranged marriage in Pakistan, Emily?
-Marriage.
Okay? We just call it marriage. There's another type of marriage. It's called love marriage and that's bad. My cousin, Rehan, married an Irish woman and he was kicked out of the family. Nobody is allowed to talk to him.
====
People say, "Sam... You're gonna love it. This kid, you're gonna have a kid, he's gonna be your best friend." A best friend that-that pukes on you and shxts everywhere and is constantly screaming. I already have friends like that.

When I was a kid, piece of chalk and a pavement, and that's your entertainment. Hopscotch. Tic-Tac-toe. Throw the chalk at Jimmy. There you go. Three games right there.
===
I want to name my kid void so he won't be able to cash any of his paychecks. "I'm sorry, sir, this says void on it." "But that's my name. Curse you, father!"
===
Why did you bring me here if you wanted me to not have an American life? We come here, but we pretend like we're still back there. That's so stupid.
- Don't you talk to your mother like that.
You don't care what I think. You just want me to follow the rules. But the r... the rules don't make sense to me. I don't pray. I don't. I haven't prayed in years. I just go down there and I play video games.
-You don't believe in Allah?
I don't know what I believe, dad. I don't know. And I can't marry someone you find for me.
-And why not?
Because I am in love with someone. I am. Her name is Emily

humbleworm thinks this title is suitable for 16 years and over

King_of_the_Squirrels thinks this title is suitable for 16 years and over