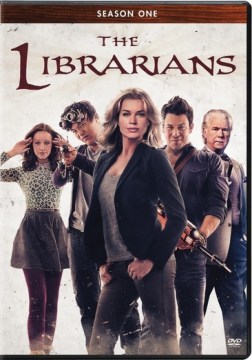 Like the Librarian movies that came before it, this TV series is a lighthearted comedy following the adventures of Librarians at the Metropolitan Library, where they collect mythic artifacts like Excalibur and deal with the trouble that comes with them.

1.5* Found this series silly. Could not get into it.

Great TV sci-fi/fantasy series like Voyagers, Quantum Leap, etc.
Drama, action, comedy, some romance, and made for all ages.
Shame it was cancelled after only 4 seasons. But at least they are on dvd, as well as the movies preceding the series.

Fun series - a bit quirky, a bit self-mocking. It would be a fun way to introduce people to many of the foundational myths of Western society (maze of the minotaur; Camelot and Excalibur; the Apple of Discord that launched the Trojan War, etc). Classes (in schools or ESL groups) could read about each of the legends and fairy tales it tackles. Thoroughly enjoyed it. Lovely tongue-in-cheek cameo by Jerry O'Connell, the star of Sliders. This series is a cross between Sliders and Quantum Leap and the 1960s show Mission Impossible.

very well done tv show the actors were great in the librarians.
The magic parts have decent effects, the science fair was good and the male actors have lots of fancy talents. will recommend to watch.

I did not care for the Librarian movies, but I found the series to be quite enjoyable.

Too lofty for its own good. Slightly more entertaining than watching paint dry.

I get the impression, having watched the whole of season 1, that, although not designated as a children (or youth) show, that its actually aimed at those who are less than adult. Having said that I mostly enjoyed the shows because I like scy fy.
I was a little distressed to see that, as the shows progressed, they shows got more brutal and the language got more and more coarse.
If this is for kids, the needless coarse language is uncalled for and the story lines are, at times, too adult. If these shows are aimed at an adult audience, then the most of the story lines are juvenile.
I am distressed that there are so many shows aimed at our youth that feature magic as themes.
Dont kid yourself, this is no "Bewitched".

Both the movies and the series are a combination of Buffy The Vampire Slayer and the 80's tv show Friday The 13th (having nothing to do with the Jason serial killer franchise) and/or the remake Warehouse 13. Yes, there is a little Indiana Jones, but fans of both Buffy (and Angel) and Friday the 13th and Warehouse 13 will love this show!

See this as a light-hearted, fanciful adventure comedy, not to be taken too seriously.
As such it can be fluffy fun. It does get better as the episodes progress, but perhaps not enough for me to look for the next season.

Perhaps loosely based on Cogman's Library universe, but this is more like a Doctor Who wannabe in a live-action Scooby-Doo variant made by Disney or Joss Whedon without Cogman's permission. To start with, these 6 librarians (trio?) don't seem very interested in books and handle the supposedly valuable ones they have like junk on a shelf. Campy and nothing that involved research, but may be enjoyed by some.

the library chose me , It wasnt as if i walked into the library and ordered a pizza.

Flynn? How did you become a Librarian? Uh, the previous Librarian... died.
===
Each Librarian has a guardian... someone who's trained in combat, tactics, survival. Sort of the brawn to the Librarian's brain. But... no, no. Much more than that. Sort of the, uh, common sense to their head in the clouds.
===
So, vampires aren't real?
-Vampires are real, but Dracula is not, because I killed him.
===
That's a nice tattoo you got there.
-Tell you what, cowboy. Tell me what it means, and I'll let you buy me a drink.
Well, it looks like you got some foreign words there. That I-talian? "Aestus cruentus adventus est et ubique carmen pudicitiae submersa est." "And the blood-dimmed tide is loosed, and everywhere, the ceremony of innocence is drowned." It's Yeats, "the second coming." It's his poem about the apocalypse. Tell me... what's a pretty little thing like you doing running around with the end of the world on her arm? -I'm Lamia.

I was actually just thinking that I now appreciate the advantage of having both a librarian and a thief. Librarians aren't perfect. None of us are. Somebody needs to hold the line. Somebody needs to keep it on an even keel.
===
Each Librarian has a guardian... someone who's trained in combat, tactics, survival. Sort of the brawn to the Librarian's brain. But... no, no. Much more than that. Sort of the, uh, common sense to their head in the clouds.
===
You're... dead.
-It's easier than it looks.
===
Wow. Auditory and sensory hallucinations linked to memory retrieval. You're a synesthete.
===
"Aestus cruentus adventus est et ubique carmen pudicitiae submersa est." "And the blood-dimmed tide is loosed, and everywhere, the ceremony of innocence is drowned." It's Yeats, "the second coming." It's his poem about the apocalypse.

I appreciate you wanting to keep them out of harm's way, but librarians exist to keep magic out of the wrong hands. Their job is to be in harm's way.
===
There are many immortal beings that can be injured but not killed. Nicholas Flamel, the wandering Jew, the black mask. Sources reported him killed many times, but he always seems to pop up when needed.
- If I can't kill this thing, what am I supposed to do?
Colonel, the library chose you for a reason. And, trust me, it wasn't because of your ability to kill.
===
The labyrinth. Imagine a building where every floor has a different layout. Sometimes, when you walk around, you move between floors without even knowing it. So, from your perspective, the layout looks different.
===
Look... the point is, I'm used to keeping my life separated, all right? My family, my friends, I like 'em. No problem. Work right alongside 'em, any of 'em. But I don't trust a single one of them...

Some people use the term "tiger mom." I'm the Wolverine of mothers.
===
Well, everybody tells me I can't do what I want, can't rely on luck, but when a magic spell turns everybody into heroes of legend, who did it turn me into? Me. Yep. I'm gonna go punch something.
===
Last time I saw you, you were trying to murder me with a sword.
- I don't get out the katana to murder just anybody, cowboy. You're special.
===
You don't look like the pictures.
-Ho, ho, ho, Santa does not look like any of the pictures, but all the pictures look like Santa, Ezekiel Jones.
===
When a person commits an act of goodwill, it does not just create more goodwill, it transforms into something better, into a gift for their fellow man.
===
How stolen is this?
-Is it really considered stolen if no one knows it's gone?
===
And Ezekiel got to know what it was like to be the good guy even just for a little while.
-Hmm. It was as horrible as I imagined.

It's a life of choice. It's not a life of safety. If I could go back and... if I could... if I could have it now, I would choose... I want that now. I'd choose to save the world. Just one more time.
===
There are no such things as UFOs. Minotaur's, haunted houses, Santa Claus, yes, but UFOs, don't be silly.
===
The most powerful witch on the planet raised an army and killed Arthur.
- No. I prefer "sorceress." "Witch" has too much gender baggage.
===
On a snack machine:
I adore these. It's like a miniature apartment building. And when you hit the right numbers, the occupant of your choice leaps to its death! And becomes your snack.
===
Well, we're lucky they're just getting trapped in fairy tales. You know, singing, dancing, woodland creatures making ball gowns. Ah, my dear, these are not your cartoon stories. These are the original fairy tales filled with death and dismemberment, and there's still a long list of archetypes.

We have to find 57 magical items? Ugh.
-No. Luckily for all of our sanities, we can employ a process of elimination. We can cross off any artifact that is currently in the library, since being untethered from this reality makes accessing them rather difficult. There have been no fires or floods reported in the area, so we can cross off anything that requires displays of nature's power. The immortals prefer Southern Europe this time of the year. Uh, the Libris Fabula has been lost for centuries, thankfully. It is a really nasty one. The black mask is not worth mentioning at this point, and the genie's lamp can go. Why not the genie's lamp? It's never the genie's lamp. Okay. So, that leaves us with the mother goose treaty of 1918. They never forgave the way Beatrix Potter rewrote that bloody history. And Aesop's lyre. ...

Magic is not an exact science. If it were, it would be science.
===
I think you're moving sideways between different timelines... each one with a minor difference. Uh, not so minor.
-Wait... are you saying that we're... I'm in a parallel universe? Wait. Is there a me here? Theoretically. If I... if I met myself, would I explode?!
===
That... That... That's Excalibur? You call Excalibur "Cal"?
-We are friends, best friends. Besties, really.
===
Close your eyes. Focus on your other senses.
-My other senses and I don't get along so well.
===
I got to see what you were like if you weren't librarian.
- How was I?
Scattered. Annoying. Alternating between between genius and bad puns.
===
Well, that makes sense, because the pyramids were designed along precise mathematical lines. If the stones are resonant to certain energy wavelengths along the magical spectrum, they act as lenses of focuses... along the three dimensions... infinity ...