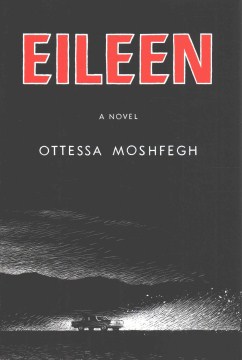 Dreaming of life in the city while caring for her alcoholic father and working in a 1960s boys' prison, a disturbed young woman is manipulated into committing a psychologically charged crime during the holiday season.
Publisher: New York : Penguin Press, 2015
ISBN: 9781594206627
1594206627

The writing wasn't bad, but it was extremely repetitive and nothing happened for the first three-quarters of the book. It seemed like a cop out to continually refer to future events and at the same time not provide more insight into her behavior and motivations leading up to the last part by saying things like "I'm not here to make excuses" or "That's another story." I never abandon a book, but wish I had in this instance. I really enjoyed "My Year of Rest and Relaxation" but this one was plodding and tedious.

Well, Moshfegh's writing continues to be soaked in the repugnancy of the flesh, as were her previous two published books. But here there is also a forceful, difficult to resist lure to it. Eileen hates her body and treats it with the disgust she believes it deserves - starving it, leaving it unwashed, suffocating it in layers of oversized clothes, purging her colon in fearful sounding laxative binges. Unwillingness to have anyone else see her naked flesh is her main reason for not killing herself. She works in a prison, an outer environment to match her inner state. She is consumed by self-loathing.

But Eileen actually takes hesitant steps to develop beyond this negative fixation on the flesh. She's a virgin, in keeping with her negative attitude towards the body, but lusts after one of the prison guards, the subtly named Randy, in the fairly normal manner. She views with awe and admiration the stylish new prison educator, Rebecca, and admires her well-adjusted body image. Look, we've got characters here whose bodies aren't written as disgusting! Finally, the book is narrated by Eileen in old age looking back on this, her far past, with a rueful yet self-forgiving attitude toward her previous hang-ups, having been married a few times and now apparently a healthy liberal old gal.

Eileen is a memorable character, and this novel is primarily a character study. It makes a nod towards thriller territory towards the end, but I think it's a fairly weak nod. Primarily this novel is about getting to know Eileen, who is difficult to like but at the same time sympathetic. You'll remember her.

I am an avid fan of Moshfegh and her morally gray characters. Eileen is brilliant, dark, moody, and unexpected. You will question who or what is "bad."

The titular character of this book, Eileen, isn't especially likeable, but she is especially real. Seeking an escape from the rote misery of her day-to-day experiences, Eileen becomes embroiled in a dire situation after meeting a charismatic and secretive new friend.

This is a short book, with most of its prose taken up with descriptions, flashbacks, and characterizations. What started as a plodding and prosaic story very quickly turned into a more taught thriller with lots of foreshadowing. While I had my grievances, they were few and far in between. More than anything, it was the narrator's voice that had a strong grip. I wanted to hear her thoughts about everything, and she didn't hold back.

Fantastically dark and quirky and so happily removed from some of the twee literature that seems to need to be written and read lately. Moshfegh's writing is gritty, cool, and not in some contrived way but because it needs to be, it's genuine. And she does it so masterfully. It's not some throw your hands up token social cause, it's not so faulty, obvious. Eileen and Moshfegh herself are very concerned with the matter of women's bodies: the dirty, deep-seated relation we have with them; what Sartre would call the 'slimey' nature of them. The reality of them as well as the complete alien disconnection we feel towards them, or are positioned to have more accurately. I really felt a strong connection to this book, to this clueless but also brave young woman, who has those parents, and her futile relationship to her father and his alcoholism. Eileen isn't polished, no excuses are made: she and this book have been accused of being 'gross': I remember when this was published and doing the rounds for the Man Booker people having such strong reactions to Eileen. But I didn't find her out of the ordinary--we, humans, are a bit gross, but labelling this book in that way casts it off as merely a trick.

Set in the 60s somewhere in New England, Eileen is 24, her mother is dead and she walks around wearing her mother's clothing. She sticks dead mice in her glove box. She purges after countless laxatives. Her sister, Joanie, the pretty one, fled home as soon as she could. She lives with her drunk father, buying him bottles of gin daily and works in a male juvenile prison at the desk. Her house is filthy. Her paranoid father sees things, gets outside to make neighbourhood trouble, but because he's an ex-cop, he gets just respect, affectionate reprimands. She fucking hates him, she imagines the icicles in their threshold driving into the gristle of his neck. She drives an old dodge, which with its dodgy exhaust, slowly suffocates her every time she drives. She is painfully embarassed by her body. Her life is dull and monotonous and she needs to run away, and as her 70-year old self narrates, she will. But not before Rebecca comes along. Rebecca is beautiful and smart, she is everything Eileen wants to be and everything she can admire. She is mysterious and alluring. And so we have a literary thriller, but again, to label it as that would be too simple. As cloying as the perfumes Eileen laughs at us for wearing to cover our organic, decomposing bodies. It's all so claustrophobic for Eileen: her body, the town, the boys' prison, her father, her family. This is about breaking free of the confines--of removing the slime, as it were. Eileen states: 'This is the story of how I disappeared.'

Just the writing itself is amazing. It is thrilling--smart and controlled. From the tone of the character, which is so pitch perfect, realistic, and unique, to the way she drops hints and builds suspense. It is both beautifully written AND a suspense. How exciting, refreshing, to find a young writer and a new career to follow. One of the best contemporary books I've read. Onwards to My Year of Rest and Relaxation.

Hate turned to love with this one! Eileen is maladjusted to say the least. Her home and work environment lacks any semblance to "normal" living or healthy mentality. This dysfunction is reflected in her bleak life. Much of the book trods through Eileen's impaired ability to eat, breathe, or relate in normal society. Much of the story affirms this. When I was about to give it a "meh" the story turned to its climax and drew me back in.

It is not often that I don't like a book. Well till "Eileen" came along I liked practically every book I read. "Eileen" maybe about character more than plot but the characters are not likeable. How long can one read and tolerate detailed descriptions of a dysfunctional family and the lead characters' dysfunctional job? There was nothing happening till the last few pages and then it was too little too late.

Didn't like this book at all...made myself plow through it thinking "this has to get better! But it didn't!! Read more as a "poor me" book. A waste of time!

Set in 1964 New England in the cold of winter, Eileen as an older adult narrates a disturbing tale of her younger self, aged 24, focusing on the last week of her time in her hometown, which she snarkly calls X-ville. Eileen lives with her alcoholic and verbally abusive father and works as a secretary at a prison for boys. Unhappy with her life, her body, and her identity, Eileen desperately wants to escape to New York. This desire gets muted somewhat when Rebecca, a beautiful and well-educated woman who connects with Eileen, arrives as a new employee at the prison. The plot builds up to Christmas Eve, when Eileen, expecting a delightful evening with Rebecca, finds herself in a situation where the only way out she can see is to commit a crime. Moshfegh spends some time explaining the details of Eileen’s life, which helps highlight her difficulties and creates a dark mood in the narrative. While the suspenseful turn in the narrative takes some time to develop, it is a turn that is unexpected and carefully crafted.

jjwoodard thinks this title is suitable for 16 years and over

daysleeper236 thinks this title is suitable for 18 years and over