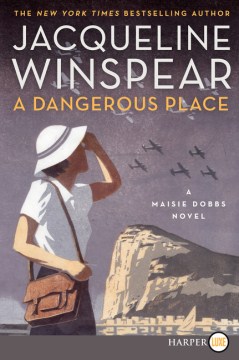 Spring 1937. In the four years since she left England, Maisie Dobbs has experienced love, contentment, stability, and the deepest tragedy a woman can endure. Now, all she wants is the peace she believes she might find by returning to India. But her sojourn in the hills of Darjeeling is cut short when her stepmother summons her home to England, her aging father Frankie Dobbs is not getting any younger. But on a ship bound for England, Maisie realizes she isn't ready to return. Against the wishes of the captain who warns her, "You will be alone in a most dangerous place," she disembarks in Gibraltar. Though she is on her own, Maisie is far from alone: the British garrison town is teeming with refugees fleeing a brutal civil war across the border in Spain.Yet the danger is very real. Days after Maisie's arrival, a photographer and member of Gibraltar's Sephardic Jewish community, Sebastian Babayoff, is murdered, and Maisie becomes entangled in the case, drawing the attention of the British Secret Service. Under the suspicious eye of a British agent, Maisie is pulled deeper into political intrigue on "the Rock" - arguably Britain's most important strategic territory - and renews an uneasy acquaintance in the process. At a crossroads between her past and her future, Maisie must choose a direction, knowing that England is, for her, an equally dangerous place, but in quite a different way.
Publisher: New York : HarperLuxe, [2015]
Edition: First HarperLuxe large print edition
Copyright Date: ©2015
ISBN: 9780062370358
0062370359

I turned this book in at the drop off box yesterday along with the other Jacqueline Winspear book that I had checked out.

Maisie Dobbs is reluctantly on her way home from India and decides to jump ship at Gibraltar. She quickly stumbles on a dead body and decides to investigate.

Suddenly and horribly widowed, pregnant Maisie (Lady Compton) loses her husband and her unborn child. She has not recovered, but is dutifully moving toward family and friends back in England. She seizes upon the murder and wanders around asking questions and drinking a lot of "milky coffee." The action is excruciatingly slow, it seems that no one is who they seem to be, and the fighting in Spain overshadows it all.

I doubt I will ever read another Maisie Dobbs book. Although the ending is pretty decent.

This was my first Maisie Dobbs novel. I enjoyed it enough to read another.

I recently discovered Maisie Dobbs and am enjoying this series very much. Interesting twist on the classic British mystery.

A good Maisie Dobbs book. She is in Gibraltar in 1937 and is a year out from losing her husband and pregnancy/baby when he chose to jump in a plane to test fly it and it crashed. She is devastated in so many ways and does not want to go home yet. She gets tracked down by Brian Huntley and ends up in the middle of murder but also the Spanish Civil War. She ends up (after solving all the mysteries) joining another woman in the hills to tend to the wounded who find their way to the small monastery. Such an interesting picture of a place and time as well as the goodness of character that is Maisie.

Enjoying the Masie Dobbs series very much. It will be interesting to see how the author develops her life in upcoming books.

The mystery itself moves painfully slowly this time, and the flashbacks at the beginning (where we learn that Maisie overcame all her misgivings about marrying James and briefly became exquisitely happy) feel to me like a cop-out. I suspect writing "happy Maisie" would have been incredibly strange territory for the author, so this was the solution.

That said, the post-trauma story is very well done, and for the first time ever I feel Maisie has begun to seem more like a character than a caricature.

When returning to England from India, while still recovering from the tragic deaths of her husband and miscarriage of their child, Maisie departs ship at Gibraltar, a place seething with danger and intrigue as the Spanish Civil War rages just across the border.
Almost at once Maisie is drawn into the mystery of a photographer's murder, one that will introduce her to some in the local Sephardic community and connections people may have to the fighting next door. Good historical mystery while carrying Maisie’s own story along.

I have to agree with other reviews of the latest Maisie Dobbs...we were cheated out of huge important chunks of our detective's life. I don't mind what's happened (I have to admit that I prefer the single Miss Dobbs to the married Lady Compton) but I do mind the strange choice to gloss over such rich material. Still, I will always love Maisie Dobbs and hope for a new and interesting service for her moving forward.

If you enjoy historical mysteries, I recommend you try this book! The heroine is resolute in a setting of world conflict in the 1930s. The first chapter quickly advances through several years and sets the mood. The core of the mystery begins with chapter 2 and an element of espionage. In spite of this being the 11th book in the Maisie Dobbs series, you need not begin with the 1st in the series.

Maisie is trying to recover from the deaths of her husband and new born baby. She is coming back from India to England but can't face her family or England so she stops in Gibraltar. She finds the dead body of photographer Sebastian Babayoff. She doesn't believe the police that a robber did it. She finds his camera at the scene and realizes that he took a picture he shouldn't have. Amid the war in Spain, Maisie looks into the death with the help of people on both sides of the war. She meets two nurses who take her to a small village clinic which is run by a nun who is a teacher. This turns into her path of recovery with knowing she will return to England for Christmas.

When last we saw Maisie she had made the decision to leave England and everything she held most dear, and to travel to India. She left behind James, her beau who had proposed, with a promise she would let him know yes or no in a year’s time.

When we pick up Maisie’s story again, several years have passed, and we learn that while Maisie accepted James’ proposal, they did not live happily ever after. Trying to slay the demons of her past, Maisie embarks on more travel, finding her way to Gibraltar. She is not there a week when she literally stumbles over a body in the dark, and she once more takes up the mantle of detective psychologist, reasoning a little occupational therapy is what her mind and heart needs.

However Gibraltar in the years before WWII is a particularly hazardous place to be – many countries at cross-purposes have agents placed there, as Gibraltar - a tiny spit of land in southern Spain across the strait from Tangier – in 1937 is controlled by the British, and is the key to controlling the entrance to the Mediterranean. Fascists, Nazis, Communists, Allies – they all have a stake in Gibraltar, and Maisie’s investigation proves to have deeper, more complex roots than that of an apparent random murder in the city’s streets.

With spies from numerous nations looking over her shoulder and with opposing viewpoints muddling her convictions, Maisie will not be satisfied until she has answers for the victim’s families, but at what cost to her soul? Steeped in history of a relatively unexamined part of World War II, Jacqueline Winspear’s thoughtful characters and plotting make for a very reflective type of mystery, one that makes her audience seek out more knowledge about her subjects, just as her main character does.

Maisie felt the anger emanating from Vallejo. The dragon is alive inside him. And if I allow it, he will bring me down further. P 116