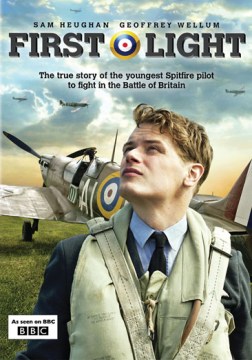 Had a hard time trying to understand dialogue. I like true stories. Why would you send up two Spitfires in a blinding rain storm? I seen only one German bomber in that mission.

My husband and I both enjoyed this docu-drama about both the brave heroism and the mental struggles of RAF Spitfire pilots in England during World War II. My only complaint is that I wish it went into more depth about the protagonist's mental breakdown, which is only briefly mentioned at the end. The youngest pilot to fight in the Battle of Britain is played by the incredible actor, Sam Heughan, known for his role as Jamie Fraser in the TV series Outlander. Outlander fans will notice, too, that the commanding officer is played by Gary Lewis, the actor who also plays Colum MacKenzie, Jamie's uncle and laird of Castle Leoch.

As a person who does watch war movies, this movie was entertaining while providing a look of one man's experience as a pilot. I thought the inclusion of the pilot's commentary at certain points in the story provided authenticity which assisted me to understand more clearly why the young men choose to join the air force instead of one of the other divisions of the military.

Excellent in every way. The acting is great and the story line closely follows the book of the same name. As a pilot, I loved this film. I didn't fast-forward at all. It is a remarkable film that pulls no punches in its depiction of the life of fighter pilots and what it means to Wellum to lose friends in air combat. Using Wellum as the narrator was brilliant as it gave the film a very special poignancy. Wellum, now in his old age, recollects his air combat experiences with exactitude. He says he will never forget his experiences during those two brief years, and I believe him.

During the Battle of Britain, 92 squadron achieved the highest combat score of any in the R.A.F. Great story.

It was O.K for a home TV movie. I was entertained and interesting. But it was NOT worth the long library wait or the price to rent from a Red Box. I fast forwarded a lot but not all the way.

Very interesting movie, which I hadn't heard of before, but just happened to see on the "new movies" shelf--great acquisitions selection! An affecting depiction of life for the Battle of Britain pilots and what they endured, with an engaging plot, and one not totally predictable. Based on Wellum's own memoir of his experiences, which has some quite moving and insightful writing in places; he appears here in the film as the narrator, looking back on his life--no actor could voice the lines as effectively! He has apparently became quite a celebrity in his later life because of the book--and deservedly so. Based on the film, I also got the book to read. But note that some of the special effects are more BBC than large-scale epic blockbuster.

On the one hand, yet another docudrama of "the young men of The Few" (and not terribly well acted, at that). On the other hand, a true story, intercut with (minimal) reminiscences from the surviving pilot in the present day.

By any standard, Englishman Geoffrey Wellum qualifies as a real-life hero. Born in 1921, Wellum enrolled in Her Majesty's Royal Air Force in August 1939, well before his 18th birthday. Within the mere span of a few months, Wellum began flying dangerous combat missions and demonstrated that rare combination of deft piloting and utter fearlessness in British skies - which helped him not only survive, but win the Distinguished Flying Cross, receive a quick promotion to flight commander, and ultimately, snag a transfer to the Mediterranean, where he routinely led eight spitfire planes over Malta.
Sam Heughan, Gary Lewis, Ben Aldridge, Alex Robertson, Paul Kynman, Paul Tinto, Jordan Bernarde