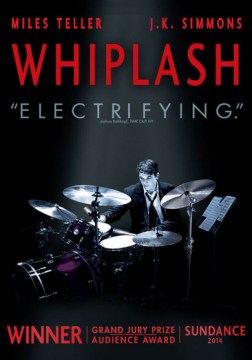 JK Simmons knocks it out of the park. Whiplash is a reflection on the abuse people will put themselves and others through to become the best.

I loved this movie -- it was intense. The ending is fantastic. I watched it twice!

I really liked it, not based on a true story, but from what I understand, the producer had a similar experience.

This movie shows young jazz musician and drummer, Andrew Neiman, as he attempts to rise to the top of his music conservatory. Finally, a well known instructor invites Andrew to join his jazz ensemble where he will drum. The teacher is known to be strict, and forces Andrew to perform to the very best of his ability even if it means losing his sanity. Miles Teller has an amazing performance as Andrew and makes you feel like you are truly experiencing his life with him. I would rate this movie 4.5/5 stars and recommend it to anyone with a passion and a love for music. @The_Reviewer of the Teen Review Board of the Hamilton Public Library

Opinions are all over the place with this one. I found it less than entertaining.

This movie was fantastic. It's all about what you're willing to sacrifice to be the best.

With raucous musical interludes punctuated by Simmons’ explosive rants and Teller’s focused meltdowns (he hammers out drum solos until his hands are raw and bloody), writer/director Damien Chazelle’s high-pressured indie feature turns one young man’s single-minded passion into a psychological battlefield. Forsaking love and family for his art, Neiman is at first cowed by the devil screaming in his face—he even begins to emulate Fletcher’s arrogant disregard for everything outside the studio—but every man has his limits and how far is too far? Paul Reiser co-stars as Andrew’s father, a man who’s own compromised dreams of becoming a writer jar against his son’s reckless ambition to succeed no matter what. Greatness always comes at a cost and Chazelle leaves his audience wondering whether or not that price is too high.

One of the best movies I have ever seen with strong lead performances. Gripping and intense

A gripping story about how far a young man is willing to go for his dream.

"Not quite my tempo."

Terence Fletcher: There are no two words in the English language more harmful than good job.

I was there to push people beyond what's expected of them. I believe that's an absolute necessity.

Fletcher: I don't think people understood what it was I was doing at Shaffer. I wasn't there to conduct. Any f-king moron can wave his arms and keep people in tempo. I was there to push people beyond what's expected of them. I believe that is... an absolute necessity. Otherwise, we're depriving the world of the next Louis Armstrong. The next Charlie Parker. I told you about how Charlie Parker became Charlie Parker, right? ... So imagine if Jones had just said: "Well, that's okay, Charlie. That was all right. Good job. "And then Charlie thinks to himself, "Well, s--t, I did do a pretty good job." End of story. No Bird. That, to me, is an absolute tragedy. But that's just what the world wants now. People wonder why jazz is dying.

Uncle: You got any friends, Andy?
Andrew: No.
Uncle: Oh, why's that?
Andrew: I don't know, I just never really saw the use.
Uncle: Well, who are you going to play with otherwise? Lennon and McCartney, they were school buddies, am I right?
Andrew: Charlie Parker didn't know anybody 'til Jo Jones threw a cymbal at his head.
Uncle: So that's your idea of success, huh?
Andrew: I think being the greatest musician of the 20th century is anybody's idea of success.
Jim: Dying broke and drunk and full of heroin at the age of 34 is not exactly my idea of success.
Andrew: I'd rather die drunk, broke at 34 and have people at a dinner table talk about me than live to be rich and sober at 90 and nobody remembered who I was.
Uncle: Ah, but your friends will remember you, that's the point.
Andrew: None of us were friends with Charlie Parker. *That's* the point.

“There are no two words more harmful than 'good job.'"

PearlyKayAm1 thinks this title is suitable for 21 years and over