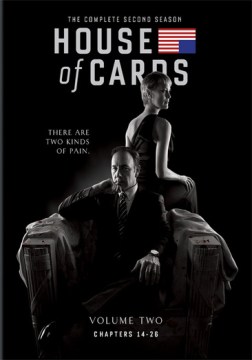 Strong start, strong finish, weak middle. Half of these episodes are forgettable, seemingly leading to naught. Still, the twin bangs that bookend it all make the sophomore season of HOUSE OF CARDS worth enduring. I recommend it.

Easily the most compelling series currently out there. Better and better it gets! Now if only I wasn't number 648 on the season three waiting list.......

The ruthless attitude of the main character Frank Underwood is not unlike that of Stephen Harper's. Politics should be a noble profession. It should be a selfless vocation dedicated to serving the public and not one of destroying everything in your path to gain power at any cost. Canadians should bear this in mind as election day draws near. House of Cards is an excellent portrayal of this type of degenerate politics. I give it five stars. PS - Vote for a leader that is not at all like Frank Underwood on Oct. 19th 2015 and change the direction of politics in Canada.

Why are most of the copies tied up in transit at the Harold Washington Branch?

Acting is excellent but hard to care about these evil people. Addictive viewing but will I watch Series 3 and 4 ?????

I both like & dislike HOC. The acting, pacing, and narrative is compelling. However it is difficult to watch people be so devious scene after scene. One thing to understand clearly here is this show does have levels of propaganda in it & is in fact fiction. That being said, as a political commentary on US government, the behind the scenes underhandedness at play does seem reflective of the times. In truth I suspect things are far worse in our government than this show portrays. But like this show we know that really there are no "good" guys or "bad" guys. Democrats & Republicans are mutually nefarious. The problem with a show like this though is we become distracted trying to search for clues as to how " things really are" in our current political climate, when really there is an unseen hand directing not only this show, but our Great show called American Democracy. I recommend this but suggest it not be taken too seriously.

Frank Underwood: One heartbeat away from the presidency and not a vote cast in my name. Democracy is so overrated.

You know what I like about money? I can stack it on a table, like this one. I can measure it with a yardstick. I can see it, smell it, buy things with it - houses, cars, clothes. Things that are real. You're going to have to show up with more than beads.
===
Frank: ... That stubbornness is far costlier than obedience.
===
Frank: You may have all the money, Raymond, but I have all the men with guns.
===
-The strongest army doesn't always win. Mao started out with only a few thousand men. They took over half a continent.
Frank: Mao is dead, and so is his China.
===
Frank: ... every kitten grows up to be a cat. They seem so harmless at first—small, quiet, lapping up their saucer of milk—but once their claws get long enough, they draw blood. Sometimes from the hand that feeds them. For those of us climbing to the top of the food chain, there can be no mercy. There is but one rule: Hunt or be hunted. ...

Jackie: It's never been about the money, no matter what you tell yourself.
Remy: When I left, Frank begged me to stay. Power vs. money, he said. Don't reduce myself to a tax bracket.
Jackie: He was right. And I doubt he begged.
Remy: He was half right. Power is better than money, for as long as it lasts.
Jackie: But it never lasts.
===
Frank: If we never did anything we shouldn't do, we'd never feel good about doing the things we should. ... There can be no false steps now. The higher up the mountain, the more treacherous the path.
===
Claire: There were political realities we couldn't ignore.
-Do you ever wonder why so many people hate Washington? It's because of people like you using phrases like that.
===
Frank: Do you think I’m a hypocrite? Well you should. I wouldn’t disagree with you. The road to power is paved with hypocrisy, and casualties. Never regret.

Freddy (rib man): Somebody's tryin' to take you out?
Francis: Appears that way.
Freddy: Whoever it is, they done stepped on the wrong motherxxyyzz' rattlesnake.
===
President to Frank: Floyd Mayweather (boxer) visited the White House this morning. ... He was telling me, it's not just about the power. There are plenty of boxers more powerful than he is. No, it's his tactics, his precision, his speed, most important, his counterpunch. He dances and dodges, then picks the perfect moment to strike. Does that sound familiar?
===
Stamper: You think I've survived with the vice president so long by being blind? Upward mobility has a ceiling with the Underwoods. I'm the ceiling.
===
Remy: You're nothing. You're a parasite.
Seth: So are you Danton. Just in a nicer suit.
===
Frank Presidents who obsess over history obsess over their place in it, instead of forging it.
-Who said that?
Frank: I did, just now.