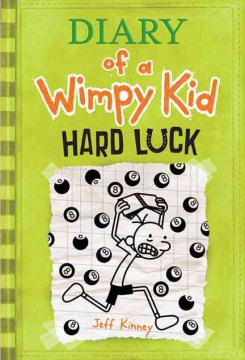 Diary of A Wimpy Kid

This book is amazing, awesome, funny, entertaining, great, dramatic all the good words!

Hilarious. A cross between a comic book and a chapter book. These series are good for people who don't like to read.

When Greg's best friend, Rowley, gets a girlfriend that he seems to always hang out with, Greg pretends that he doesn't need Rowley but truly is dying for someone to hang out with.

The wimpy kid's name is Greg Hefly. His best friend, Rowly, gets a girlfriend but then breaks up with her.

Greg is a skinny kid who doesn't always get along with his family. He pretty much gets bullied by everyone. The way he gets back at everyone is by being the yearbook photographer and taking bad pictures of everyone.

Greg starts off with his friend Rowly, but then Rowly gets another best friend and doesn't hang out with him anymore. Greg's mom finds out and then she tries to get him friends. One of Greg's problems is that there are kids who live in the woods and chase him. But in the end, everything works out.

This book starts out good, but gets kind of weird. If you want to laugh, this is the book for you. I liked it.

good book u could read it

Barirah16 thinks this title is suitable for All Ages

serena_28 thinks this title is suitable for All Ages

blue_dog_17079 thinks this title is suitable for All Ages

Vincent07 thinks this title is suitable for All Ages

MADKC4Ever thinks this title is suitable for All Ages

greg has hardluck in the begging of school

school started and greg is having hard luck

a lot of funny and bad things happen to greg such as stopping something fun at school like getting extra recess and the cops accidentally coming to his home (his mum and dad had to trace a few hours to get everything cleared up with the cops.Also his friend Rowley finds a girl who likes him and he ditches Greg

In the book called Diary of a Wimpy kid Hard Luck there is a boy named Greg and he lost his best friend Rowley because he got a girlfriend. Rowley used to go with his best friend Greg. Greg has a few problem before reaches to school. On the way there is a dog named Robert he used to chase Rowley and Greg and they have to avoid dog poop. Another problem between Greg's house and the school is a bunch of kids. Greg used to go through Grandma street but the people started to do construction so Greg has to go through the short cut which leads to the kids I forget to tell you what they are called they are called the Mingo kids also there is another trouble. The trouble is that there is a guy named Mr.Sandoval who puts poles on either side of his driveway so the gut who flows it know where the pavement is.Well Greg and Rowley were horsing around with the poles an now did not put where it was and the guy who plows plowed it the wrong and Mr Sandoval is waiting to see their faces again and Greg is not ready ESPECIALLY not by himself. That is what the Diary of Wimpy kid Hard Luck is about.

THE BOOK IS ABOUT A BOY HOW STARTS HIS NEW SCHOOL YEAR AND HIS FRIEND HAS A GIRL FRIEND .

"Mom's always saying that friends will come and go but family is forever. Well, if that's true, I could be in for a rough ride."

in school we learned that albert einstein wore the same clothes every day so he didn't have to waste any brainpower on deciding what to wear.

"THIS BOOK IS AWESOME"