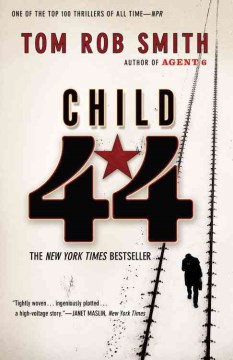 How do you solve an impossible crime? It is a society that is, officially, a haven for its citizens. Superior to the decadent West, Stalin's Soviet Union strives to be a paradise for its workers, providing for all of their needs: education, health care, security. In exchange, all that is required is their hard work, and their loyalty and faith to the Soviet State. Leo Demidov knows this better than most. A rising, prominent officer in the State Security force, Leo is a former war hero whose only ambition is to serve his country. To defend this workers' paradise--and to guarantee a secure life for his parents, and for his wife, Raisa--Leo has spent his career guarding against threats to the State. Ideological crimes--crimes of thought, crimes of disloyalty, crimes against the revolution--are forcefully suppressed, without question. And then the impossible happens. A different kind of criminal--a murderer--is on the loose, killing at will. At the same time, Leo finds himself demoted and denounced by his enemies, all but sentenced to death. The only way to salvage what remains of his life is to uncover this criminal. But in a society that is officially paradise, it's a crime against the state to suggest that a murderer--much less a serial killer--is in their midst. To save his life and the lives of his family, Leo must confront the vast resources and reach of the security forces with only Raisa remaining at his side, to find and stop a criminal that the State won't admit even exists.
Publisher: New York : Grand Central Pub., 2008
ISBN: 9780446572767
9780446402385
0446402389

A book that just can't stay interesting with a twist that just doesn't pay off.

Hmmm... I wasn't expecting the end. I guess I didn't know what to expect.

A murder mystery set in 1953 Russia - where murder does not occur. Only the deviant and corrupt West have murders. An interesting look at the complex Stalin society of "double speak", where innocence does not exsist and all live in a constant state of fear. The main character,Leo, grows from a blind and rigid follower of the Soviet dogma to a man compelled to find the truth - a dangerous thing at the time.
While one story line develops the murders with plot twists and turns, the other story tells us of the lives of the people in Soviet Russia.
A mystery with a strong historical presence.
I enjoyed this book and would read more of this author.

Interesting read. I was surprised I could barely put the book down. Moving on to the second book in the series, hoping it's just a great!

Reading this book is making me HATE a country (I'm not sure if that's the right word, maybe it should be state). Of course the Soviet Union no longer exists and I believe life is better in Russia and the other countries that made up the USSR. But for me the feeling of fear still lingers. I probably wouldn't go to Russia, unless I was part of a big tour group with clearly defined and authorised activities, because of my continued worry about being arrested for doing or saying something considered anti-Russian (it's likely I'll never go to China for the same reason). The idea that the whole population lived under the terror of being taken away (or simply murdered in their beds) for something as ridiculous as being the neighbour of a suspected 'spy' is absolutely horrifying. How’d people live like that? How could people higher up in the government think that’s a good way for the people to live? Even the upper echelons of government and society lived with the possibility of being denounced as a traitor to the state. No one was ever safe, no matter who you were. It didn't matter if you were innocent, the State Security Service followed the mantra that 'It is better that ten innocent men suffer than one guilty man go free'. What kind of life is that?! Never being able to trust anyone. I'm getting an ulcer just thinking about it.

It makes me even angrier to hear Leo, the main character in this book, trying to defend the party line. Talking about this being a better way of life, even as he's contemplating the likelihood of being arrested if he can't capture the fugitive he and his team are chasing. And if you were arrested you didn't simply go to jail (though that would be bad enough), you were sent to a 'correctional labour camp' or you were taken to an infamous building where they could shoot and dispose of hundreds of 'traitors' a day.

Now that the atmosphere of fear, paranoia, and distrust in Soviet Russia has been established and it's been shown that no one is safe from the MGB, not even the MGB, we've moved on to the crime side of the story. I felt a certain amount of vindictive pleasure when Leo was denounced. I felt like he deserved, and needed, to understand what he had put countless numbers of innocent people through. Unfortunately, he’ll never know the true extent of the torture his legally arrested 'traitors' went through, he's not going to be pumped full of camphor oil or be forced to watch as the two people he loves most are shot on their knees in the snow. He was denounced at just the right time, just before Stalin died, leaving his fate in limbo. No one wants to do anything that might anger whoever the next leader might be, and when Lavrentia Beria (Stalin's second in command) took over it was finally decided that it was too politically risky to prosecute a decorated war hero without any hard evidence. So instead of the torture and death Leo and (by association) Raisa could normally have expected Leo gets demoted to the militia (sounds kind of like going from an FBI agent to a beat cop) and sent to a backwoods mill town with only a tiny one-room apartment above a bar as their accommodation and the knowledge that Leo's parents have suffered a similar demotion in job and lifestyle.

I'm glad that Vasili got his just desserts, but less sure about Andrei's death. The way it happened seemed a bit of an anticlimax. Despite Andrei's attempt to explain his actions I still don't really believe what he said, it didn't seem logical (even for a crazy person). Murdering children in a similar way to the events of Andrei and Pavel's last night together as way of communicating with his long lost brother seems like a bit of a stretch. Despite what he said, Andrei can't have been that desperate to alert Pavel/Leo as he had to leave a lot of 'breadcrumbs' before Leo caught on to what was happening, let alone that it was Andrei doing it all. Andrei's motives needed to be much more logically explained.

This book grabbed my attention and held it so well that I finished it in 2 sittings - every time I tried to put it down, I'd turn the page and just keep reading. I hope the next 2 books in the series are as interesting and well-written.

Definitely a compelling read. For quite a while, the reader has little idea where it's going. There are many barriers to answering the mystery, and as the story proceeds it follows predictable lines toward its end.

This is a book worth the read. Set in Soviet Russia near the end of Stalin, a police investigator finds that he must not only conduct and unsanctioned investigation, but must fight a system that works completely against him, while as the same time dealing with a wife who also mistrusts and hates him. To put it mildly, if I had to work in the system and conditions that Leo (the main character) had to work in to solve his investigation, I would have thrown up my arms in utter frustration.

That I believe is what make this book so captivating, Leo's perseverance. This is the system, the only system, and the only way he knows and understands. At the beginning, Leo is a dedicated and loyal member of the soviet system. He knows the rules and knows how to manure within the system. While investigating what the system says is train accident in which a four year old boy is killed, Leo is left with questions about the investigation that do not add up. Then his loyalty is suddenly challenged when he is forced to denounce his wife, which he will not do and is therefore sent to the outer reaches of Russia, and reduced to the lowest level in the militia.

No Leo finds that there is another child that has been killed, with all the similarities of the alleged accident in Moscow. While saving what he can, if he can, of his marriage, Leo presses on with his investigation of this child killing, which reveals other child killings, all the while, the system refuses to accept that such killings would even exist, much less happen in their society. It is incomprehensible to most everyone, why any one would travel about killing children in the soviet state. To them, it is an impossibility and therefore can not be.

This is system that Leo must work through. Denounced by his superiors, working in system that approves everything, in a society of deep distrust of everyone, all the while dealing with a marriage that is under the greatest stresses any marriage could encounter.

I was continually caught up in the fact that Leo, above all else, was true to himself, no matter what was dealt him. He was going to do what was right, in a society in which the only right thing was everyday survival and to hell with your neighbor. In a system which fostered and bread this fear and distrust, which tried to control every aspect of everyones lives, who determined what was and what would be best only to protect the image of the state and the politicians, who leached off of this society.

This is a story of endurance, perseverance, and finding out what one is truly made of and what one can endure, at the worst of times, even when they are ready to give up, but their inner being, drives them on to do what is right.

Well worth the read. I think you will find the story intriguing and suspenseful, all the while waiting to see if Leo will overcome all that he must deal with and encounters. if you think I have spoiled the story for you, I have come no where close with all the events and developments in this story. There is a lot more Leo must deal with, but you will have to read it to discover them.

RobertELPL thinks this title is suitable for 18 years and over

storiesnyc32 thinks this title is suitable for 18 years and over