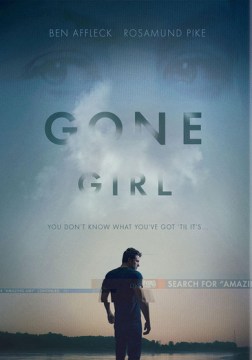 Not the best movie ever

The movie was much less time to waste than reading the book, so I’m glad I went there first. Now I won’t waste my time on the book. Very very disappointed in this movie.

Two people who were sickos. Stayed up late too to watch the outcome. Nick was lucky to have a sister who stuck by him. Movie way too long. Shocked at the ending. Bloody scenes were ridiculous. Why did police not let her shower during interrogation? Amy was a real B_ _ _ _H

Based on Gillian Flynn's 2012 novel, this psychological thriller of film follows the broken marriage of the Dunne family.

Could not watch. Too much freezing. Dirty disk. Returning. May try later.

Amy Dunne (Rosamund Pike) and Nick Dunne (Ben Affleck) show a picture-perfect marriage to the public. On their fifth wedding anniversary Amy goes missing and Nick becomes the prime suspect. You then witness the adventure all characters go on to find Amy. I very much enjoyed this movie. There’s a lot of mystery behind this movie and lots of reveals. Its very well done how the story line is told. Cast is very well done and will leave you watching till the end. This movie also has a dark side to it which is interesting. Overall one of my favourite mystery movies and would highly recommend watching it. 4.5/5 stars @EffyStonem of the Hamilton Public Library Teen Review Board.

An overrated movie, primarily because of the cast. The book was far better.

Did not read the book but knows that the plot was coping real life case and turned in up-side downed. The story is kind of strange with lots of holes in them and kind of stupid, I wish some how it can be made more coherent. It feels the director or producer were fragmented. The story could have ended 35 mins earlier and made a better story. Worth watching.

If the movie were comedy or satire - would be much better
It is not that is shallow, but I was watching and found very unrealistic
ok, media indeed love to buy any story just to present
phenomenon of Jerry Springer stories proof there is no limit in stupidity of spectators
but I can't say the same about police
the movie about manipulation seems to me important but only if you show that absurd and yes, make it "as it is" - entertaining as teaching something
once I started explaining to my wife "what is that movie about" was hit second time how that plot is unrealistic and how many naivety it presents

This movie is insane! I was entertained by it!

ianyue thinks this title is suitable for 15 years and over

samanthasanche thinks this title is suitable for 18 years and over

trevordunfordswife thinks this title is suitable for 18 years and over

VV12 thinks this title is suitable for 16 years and over

HarmonyPeaceLove thinks this title is suitable for 18 years and over

kuligs thinks this title is suitable for 16 years and over

Saint_Mirin thinks this title is suitable for 16 years and over

ynnong thinks this title is suitable for 16 years and over

Lisagail thinks this title is suitable for 13 years and under

soundspace thinks this title is suitable for 17 years and over

Sexual Content: Not too many of them, but they DO get down and dirty!

Other: It is definitely an Adult film and deserves a Restricted rating if it doesn't have one. NOT for children.

Violence: A throat is slashed on camera, right in front of your eyes. Can't get more graphic than that.

Coarse Language: Afleck can't open his mouth without using the F-bomb and Margo, his sister, is even worse.

Other: It's not a movie for teens especially 13. Too graphic, lots of foul language, too sexual & violent. I feel 18 & up maybe 21 of age & up is better. It's disturbing to see someone have so much anger & revenge just to get her way.

Amy Dunne: We're so cute. I wanna punch us in the face.

Margo Dunne: [discussing what kind of wood item Nick is going to give to Amy for their 5th wedding anniversary, the "wood" anniversary] So what did you get her?
Nick Dunne: There's no good gift for wood.
Margo Dunne: I know. Go home, fuck her brains out, smack her with your penis, and you say, "There's some wood for you, bitch!"

Amy: Desi, how could I be bored? You can discuss 18th-century symphonies...19th-century impressionists, quote proust in French. Nick's idea of culture was a reality TV marathon...With one hand down his boxers.

Amy: You think you would be happy with a nice Midwestern girl? No way, baby. I'm it.
Nick: Look, you're delusional. You're insane. Why would you even want this? Yes, I loved you. And then all we did was resent each other, and try to control each other. And cause each other pain.
Amy: That's marriage.

Amy: All those awful couples we know. Those wives who treat their men like dancing monkeys... To be trained and paraded.
Nick: Husbands who treat their wives like the highway patrol ...To be out-foxed and avoided.

many more from IMDb:

Officer You ever hear the expression the simplest answer is often the correct one?
Rhonda: Actually, I have never found that to be true.

Amy: Nick dunne took my pride and my dignity and my hope and my money. He took and took from me until I no longer existed. That's murder.