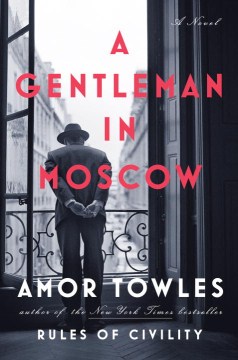 A Gentleman in Moscow

A lovely read - engaging, witty and elegant. What a comforting departure from all the grim non-fiction I've been using my reading time on.

This author's name, Amor Towles, sounds like a nice linen company. This novel by the writer of "Rules of Civility" is more clever than witty or profound. Towles works in a lot of obvious references to Russian heavyweights like Chekov, Tolstoy, and Dostoevsky. Also I would have called it "Count Me In Moscow" because the main character is a Count under hotel arrest after the Revolution.

The titular "Gentleman in Moscow" is more accurately a "gentleman in the Metropol Hotel" as the vast majority of the 30+ year span of the novel takes place within the elegant and sprawling dining rooms, kitchens, ballrooms, guest rooms, basements, attics, closets, and hallways of that establishment. Count Alexander Ilyich Rostov is, in the opening pages, sentenced to house arrest in a tiny room of the hotel as the Bolsheviks set about transforming the outside world via collectivization, purging, and five-year plans. Throughout it all, the Count and the hotel attempt to maintain a certain level of civility and charm, even as they are forced to substitute beets for apples in the evening's special dish and remove all the bourgeois labels from the bottles of wine in the vast cellars. The reader, like the Count, is only indirectly made aware of the developments in the outside world through occasional visitors to the hotel. Despite his best efforts to stick to his habits, the Count grows in dealing with his loss and grief, building real friendships, developing romance out of casual sexual encounters, and ultimately - and unexpectedly - becoming a parent. Amor Towles writes with a commanding and witty erudition that never feels pretentious or forced. Reading this book is a true delight.

Exquisite! Elegant prose! A gentleman through and through...if only there were more like him!

I waited for a print copy of A Gentleman in Moscow because I expected it to be an exceptional, literary read, and I wanted to give it due attention. Besides, my mother in law had told me that "the gentleman" (as she calls him) was her favourite character in a book, ever. So I approached this book with great anticipation . . . and I was not disappointed. It was everything I didn't know I needed, elegant and thoughtful and intricately pieced together, so that, as the plot came together and revealed itself, I was absolutely delighted and awed. That said, it took some time and patience--this is not a book to be rushed! Though the plot is not fast, and unfolds in just one setting (mostly), I was reluctant to finish it, and sad and delighted once I'd done so.

An exceptional book! Engaging, well-developed characters full of charm and wit. Also engendered an unguessed at appreciation for Russian history and culture!

I didn't want it to end!

Delightful characters; intriguing and well-written story. This page-turner has become my favorite book of the year! I was sad to see it end.

I really enjoyed this book. The descriptions of the times, the people, the whole atmosphere was just amazing. I felt transported back in time. I also felt a real affinity for the characters, not just a passing interest. I wanted to know how they made out, and I felt invested in them. It is not often that an author is able to convey that kind of interest. An excellent book.

Read this one to the end! The ending is the best part!

I was swept away by the beautiful writing and fascinating characters in "A Gentleman in Moscow." This is the story of a Russian aristocrat living under house arrest in a luxury hotel. Kenneth Branagh will star in and produce the TV adaptation. Don't wait to watch it, read it first!

Nope, didn’t think I’d like this book despite all the 5 star reviews. By golly, they were right. The closest comparison I can think of is Alexander McCall Smith’s 44 Scotland series. Only this takes you from pre-revolutionary Russia up to the mid-1950s. And the story is told all from the point of view of a former aristocrat held in house arrest at a classy Moscow hotel. This turned out to be one of m favorite books, with a wonderful end, but not what I expected.

Excellent book, beautifully written. Such a joy to read.

Terrific!! Amazing!! One of the best novels I have read recently. Count Alexander Rostov is made a non-person for the sin of being an aristocrat in the early days after the Russian revolution. Instead of being shot he is confined to the Metropol hotel for the rest of his life. The author educates us in Russian literature and politics in such a palatable manner that you do not even realize how much you are learning. As the count lives out his life in one building he expands his experiences and loyalties to friends and children so that his existence becomes so full that the confinement almost disappears. The author is superb at creating characters !! Highly recommend!!! Kristi & Abby Tabby

I did end up adoring this book, but it's not the easiest book to get into. You have to give it a chance and turn yourself over to the experience. And once you do, you'll see the Count is charming, surprising, and utterly engrossing. Sort of a Scarlet Pimpernel crossed with Rick from 'Casablanca'. Read it more than once. Really. You'll have to, since it's irresistible.

This is a book of historical fiction that takes place in Moscow. It's one of the best books I've read in a long time. I loved all the characters, especially Count Alexander Rostov, the main character. He is truly a gentleman. Even though he was stripped of his freedom he continued to live his life with dignity, kindness, and grace. The writing was beautiful and it really brought the story to life for me. I never felt like I wanted to rush through the book even though it was slow paced. Instead I wanted to explore the halls with Nina and dine with the Count. I loved everything about this book and highly recommend that you enjoy it with a glass of wine. 5 giant stars!

Count Rostov is portrayed as a multi-layered man whose circumstances have changed radically from his youth to the 30+ years he spends as a man under house arrest. While he fondly reminisces about those days of old, he is not paralyzed by them. Through his relationships with other employees and guests at the Metropol Hotel in Moscow he learns to live his new life to the fullest if not beat the communists at their own game.
A great read, well paced and imminently entertaining!

Almost from the start, this charming adult fairy tale cast its spell on me, though the sentimentality was never overpowering. Like the bouillabaisse served by the Triumvirate, A GENTLEMAN IN MOSCOW has all the right ingredients: an original, engaging story; a colorful cast of characters; a sumptuous setting; beautiful prose; and moments of humor and wisdom, with dashes of Russian history and culture. It so pleased my literary palate, I just might go back for seconds.

Can I really be the only person who didn't care for this book? Or is everyone else just afraid to say so! I was so bored I only got through about 100 pages and gave up.

Towles guides us on a literary journey through all of the major nodes of Russian culture in the early 20th century - the political mayhem around the founding of the Soviet state, the hopefulness of the Five Year Plans and the growing bureaucracy, the rise of Stalin and the different relations with the United States. We get to experience the best of Russian food, music, jazz, ballet, fashion, and even underground religion.
But the best aspect for Russophiles (or anyone who enjoys a good turn of phrase) is that the author shapes his prose to mirror aesthetic shifts through time: echoes of imperial Tolstoy at first, followed by moments of world-weary Soviet realism, and some hints of quiet absurdist protest against the way of life. All of this smorgasboard is laid before us in the limited space of the Hotel Metropol, where the title character is sentenced to house arrest for the rest of his life.
The phrase tour de force is appropriate.