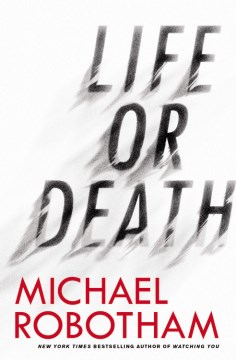 Audie has spent the last ten years in prison, accused of killing four people and stealing seven million dollars. His sentence would have been longer, but his attorney made a deal while he was in a coma. On the day before he is to be paroled, Audie escapes from prison. Nobody knows why he would do that, but the theory is that he is mentally unbalanced because on the day of the robbery, he was shot in the head and had to be put back together like "a jigsaw puzzle." Once he escapes, Audie doesn't behave as a typical escapee from prison. Instead of running to a faraway country, he stays in town and finds places to sleep where he won't be noticed or caught. He has a plan which includes visiting the home of his arresting officer and talking to his sister. Meanwhile, Moss, who was in the prison cell next to Audie is taken from prison and sent on a mission to find Audie and bring him back. He isn't sure why these unknown men want Audie, but the more time he spends looking for him, the less he wants to bring Audie back to men who will surely kill him.

Life or Death does contain some elements of mystery in the story of Audie, why he was imprisoned, and why he escaped with only one day left on his sentence, but the majority of the book is the story of a tragic life. There are some twists and turns in the story, but they are fairly predictable. Audie spends lots of time in the story contemplating choices he has made in the past and trying to determine if they have made any difference in his life or if his whole life has been based on fate. As a result, there is really only one way this story could have ended, but instead, it takes a safer route that defeats the theme that was presented throughout the rest of the story. A different ending would have made a much greater impact and have been much more logical. Overall, this is a decent book, that starts a little slow and leaves the reader feeling a bit defeated.

Another great book by this author!

An incredibly well-written mystery. The author holds the reason behind Audie's seemingly suicidal behavior hidden for most of the story. Intense, tragic and totally enjoyable. I would definitely recommend this to anyone who enjoys action and a relentless hero.

A great plot, moves quickly and Audie is one unlikely hero.

Really enjoyed this one. Will look for more by this author.

After spending ten hellish years in a Texas prison for his part in an armed-truck robbery gone wrong, Audie Palmer escapes...the night before he's paroled. No one knows why (or where he's gone), but the local cops, the FBI, and Audie's best friend in prison (he's been offered a deal: find Audie and go free) would all like to find out. While they all believe that Audie must have plans to retrieve the never-recovered seven million dollars, he escaped for entirely different reasons. Peppered with stunning plot twists and peopled with fascinating, unforgettable characters, Life or Death is a complex, suspenseful crime novel that also includes a love story.

Enjoyed this so much, I read it twice. All the glowing reports are well deserved, everything falls into place in the end. Highly recommended.

Excellent book. It kept me turning pages all night long. Audie did everything for love.

Life is short. Love is Vast. Live your life like there is no tomorrow.

'A writer who can create terror from the commonplace' : words on the cover state. Are they talking about a different book? Anyhow, I liked this book. It's not a thriller but is physiological and suspenseful. Revelatory of how men think, feel and act and what motivates them. The book itself, I mean the actual physical book with nice clean edged pages is so nice. It was pleasant on my fingers to flip these smooth pages back to previous chapters to review. I just hate jagged rough edges on the pages of books. I liked the story. It was captivating and like others I didn't want to put it down; despite the fact that the characters all seemed to have a similar personality. There's a resemblance to Shaw Shank redemption in the storyline/ plot. I don't think the editor did justice to the author's story unless Robutham wrote with words missing, words added, missing letters and the editor just copied it down, but really only noticeable if analyzed. There could have been more description of places localities. I'm glad I read it. It's a pretty good book.

I cannot believe what an exciting book this was. I thought throughout the read, where do these Robotham come up with this plot. Absolutely enthralled with all the characters good and bad. I too enjoy stand alone books better then the series, the only exception is Lucas Davenport.
A wonderful book.

I really enjoyed this book. I have read his series books and although I like them - this stand-alone with twists is great.

This was my first time reading this author. I really enjoyed this story and the character of Audie. The poor guy can't catch a break. Everyone is out to get him and the odds are stacked against him, but he keeps on going - trying to keep a promise he made 10 years earlier. A good page turner.

Wow, what a page-turning mystery, and I cried like a baby at the end.

Robotham has an entertaining writing style and original phrasings that made this book more enjoyable than it would have been in the hands of a less talented writer. Having said that, the storyline was somewhat predictable and I never felt very engaged with the characters.

I was so into the book and that rarely happens. Thrilling and fun.

Excellent; non-series character. Not for the squeamish.

This book will keep you on the edge of your seat. It is filled with action, and the story is very well written. It is a good crime and police novel with many twists. It was hard to put it down.

read it in less than a day. Riveted almost from first page

A good read. I love Michael Robotham's "Joe O'Loughlin" books and was expecting a similar psychological thriller. Not much psychology but lots of action in this book.

I love Michael Robotham's books. I was disappointed that this book wasn't about the usual characters, but only for a few pages. I liked this one so much I had to read it again. I recommend a slow read of this story instead, to avoid the few letdowns in the story (subplots that aren't necessary, annoying dialect). Looking forward to his next book.

sorry I cannot truthully tell you I loved it. Got distracted by other issues. try it.

I agree with the last 3 reviews. An excellent, easy read and I will read his others.