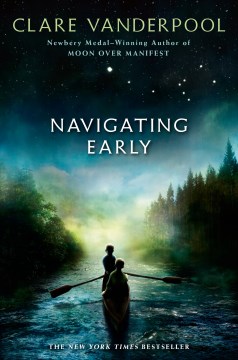 When Jack meets Early at the boarding school in Maine, he finds him the strangest of boys. Early can read the language of numbers and is determined that they are telling him that his older brother, whose dog tags were returned to the family, is still alive. Early embarks on a trip along the Appalachian trail to find his long lost brother and a great black bear. So how is the unending number of pi connected to this quest that Jack joins? This is a quest of high adventure involving pirates and snakes and skeletons. But beneath it all is quest of the pain-filled heart to find its way back home.

This book starts out quiet but it builds to a glorious conclusion in which our inter-connectedness is revealed as the great healer. Stick with this story. It is worth the journey.

Oh, how I loved this book. Although a children's book, I'm not sure many of the current generation of kids would be drawn to it. It's 1940s timeframe and references, and the nostalgic feel of it would probably not appeal to a lot of kids. However, it's written with such beauty and depth that adults definitely can enjoy it. As I was reading this book I envisioned it as a classic kids buddy movie like Stand by Me and The Goonies. All the nuances of this book were so well done. The title of the book, the friendship between Jack and Early, the way they are both emotionally lost and searching, Early's fascination with the number pi, the way their adventure parallels Early's story of Pi, the characters they meet along the way - especially Gunnar. Oh my gosh I could go on and on. Definitely recommend this one.

This is one of the best novels I ever read my children (then aged 9 and 7 years). It has a wonderful message, buried in a story of mystery, adventure, and coming-of-age.

Found this one recommended on one of my favorite blogs, and enjoyed it greatly! Early is wonderfully, mysteriously, eccentric, but it all makes sense when you read the epilogue. I would say this book is all about stories and family, loyalty and love, and finding who you are meant to be. Well and thoughtfully written, this book has an inherent beauty, but an underlying sadness that might be a little too much for the younger ones. For everyone else, what are you waiting for? This book is great!

This book starts kind of slow, but hang in there. The author ties it all together with a bang you won't expect.

A great read! At first I thought that they where just pretending to go on this adventure, but these events have a huge impact on their lives. A fabulous book for 10-12 year olds and it keeps you wanting more, even after the epilogue ends.

After Jack meets Early at a boarding school in Maine, he is intrigued by Early’s oddities. Over their fall break, the two set out rowing down a river. Early tells a long, ongoing narrative about a lost boy named Pi. It becomes clear to Jack that Early’s quest is really about his brother who went missing during WWII. The beginning parts of the novel seem like an entirely different part than the surreal adventure Early go on later in the book. The book is well-written, but there are times where it seems like it’s trying to be more profound than it actually is.

Interest level: ages 9-12. Jack is sent to boarding school after his mother’s death at the end of WWII, and it is here he meets a child savant named Early. The two embark on an epic adventure down the river where Early recounts an exciting saga based on the number Pi. A beautiful blend of historical fiction and personal journeys.

This is a great read, though it is a pretty serious journey. It is not as light and cheery as the cover might make it seem, but it is still something I would recommend to anyone interested in an adventure tale.

Recommended to me (an adult) by a 12-year-old relative of mine, this is quite possibly the best book I've read this decade. I can see why she recommended it to me. At times, my heart would pound in anticipation of what was happening. Other times, I grieved silently for the emotional trials of both of these boys, each abandoned in their own way. While probably not appealing to anyone under the age of eleven, I highly recommend it to the age 12-and-over crowd, both boys and girls, and to any adult as well. This is an outstanding piece of literature by a Kansas author.

A very unusual book about a boy from Kansas who moved to a boarding school on the East Coast. A surprising friendship with an unusual boy with twists in the book that make you want to keep reading. Pirates? bears? What will happen next?

In many ways, I feel this review could simply repeat what I said in the last review I wrote, for Counting by 7s by Holly Goldberg Sloan: that it is a lovely book about kids that may not so much be for kids; that it will, unfortunately, appeal more to adult readers than the target audience. The fact that it was an honor book not for the Newbery Award for children but for the Printz Award for teens is a good indication of that appeal, I think.

The book has many ingredients that could give it adventurous appeal: an epic quest in the wilderness, encounters with bears and rattlesnakes, dangerous pirates, odd personalities discovered in the backwoods, boating and athletic challenges, and more. Yet the adventure is filtered through Jack's relationship with his friend Early and the mutual grieving that they are both suffering through after losing significant family members. Early is a high-functioning, savant autistic with synesthesia--to him, numbers have colors, scents, sounds, emotions, and more--and he is obsessed with the mythical tale being told by the numbers of Pi as he calculates them to further and further decimal places. He believes the tale will lead him to his older brother who died in the war. These aspects are, as I said, lovely, and wonderfully crafted, deep, nuanced, allegorical, and healing for the two boys (and their families), but they just aren't all that--for lack of a better word--fun. It's a thoughtful and moving story; it's not so much an adventurous and compelling one. I enjoyed it. Will younger readers? I'm not sure.

This was a lovely book, better than Clare Vanderpool's last. The author seemed to focus on her child characters better in this one. I enjoyed the epic quest and getting to know both Jack and Early. There was a lot of beauty in the telling in this book about grief and loss. More so than Counting by 7's which is about lots more than grief. Despite the author giving us more on her child characters, despite her bringing in "pirates" and "volcanoes" and wilderness trekking I still feel that this book appeals more to adults than kids. Pi's story did not work for me in its separate sections-- it just didn't have much interest nor did it seem like the story that Early was telling. Also, I think a story about Pi the navigator is awfully close to The Life of Pi by Yann Martel. Not sure to whom to recommend this, other than adults.

This book truly touched my heart, and I don't say that lightly. I didn't laugh out loud or cry, but I did think. A lot. And I felt even more. It is beautifully written. Every sentence is crafted perfectly. It is definitely one of my new all-time favorites!