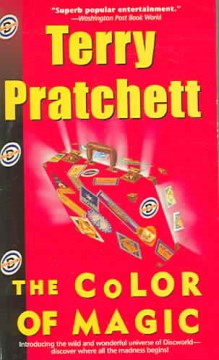 The Color of Magic

What an amazing world to discover. I am excited to check out the next book in the series. Parts of this book made me laugh right out loud.

Interesting start, but ultimately I never connected with the plot, which unintentionally brought to life a video game-esque understanding of "go here and see this person and do this thing" quests, but without the juicy main storyline to fall back on. While I did enjoy the thematically rich yet vile city of Ankh-Morpork, I really can't remember any characters other than Rincewind, Twoflower, and the Luggage. Trickily, the novel ends in a cliffhanger, so I am compelled to read the sequel. A mediocre start to my Discworld education.

This would be a good one for Clark to start with. I researched it a lot.

The first of Pratchett's Discworld series and probably the weakest. Lots of funny stuff, but the book is basically a couple of characters exploring Discworld while the author looks for wordplay that will fit each location. The book isn't actually *about* anything. Rincewind, the grumpy and mostly ineffective wizard, is not much of a character but he does allow us to meet many locations and concepts that will be useful in future books. There might have been a plot but I didn't notice. The second book, *The Light Fantastic*, improves on that part.

There is no requirement to begin the series here or with the second book. The quality really picks up with Book 3, *Equal Rites*; but there are many other Pratchett books you could start with.

While understandably his weakest entry into the extensive Discworld series, considering it's the first, Terry Pratchett's "Colour of Magic" offers a crazed slapstick parody of many classic cliches and tropes of fantasy that comedically bashes heads with some of the setting's more modern sensibilities. While most consider it the worst place to start with the series, starting from the very beginning shows just how much Pratchett developed as an author.

Seems to be a book with a postmodernist philosophy.

Terry Pratchett's first practice novel. His wonderful writing style is already evident, but characters and story-telling ability are still works in progress in this novel.

An excellent story. Set in the fantasy land of Discworld (a disc on the back of four elephants riding on the back of a giant turtle), this story parodies and turns on their heads many fantasy cliches. It follows a failed wizard named Rincewind, who knows only one spell (one of the great Eight spells, the most powerful spells in the universe), and Discworld's first tourist, Twoflower, who owns a magical trunk made of sapient pearwood, determined to follow its master to, quite literally, the ends of the earth. Hilarious and creative, this book makes for an excellent slapstick adventure.

A rogue wizard grew out of cowardice. A luggage made of sapient pearwood cast the most magic spells, while his master/owner Twoflower, a seeker of wonder, appeared the most distant to me.

I read this book when I was a teenager and I have loved Pratchett's stories since. It is funny, silly, and lighthearted. Also, luggage.

I loved this book. I loved, loved, loved this book. I don't know how many other books have made me happy the way this one has. FIVE STARS FOR YOU.
I picked up this first Discworld book because I'd heard it was a flat world that was somehow on the back of a turtle floating through space.
And to me this is amazing, so I read it, and it was not a disappointment (although I was expecting the whole perched on a giant turtle moving through space thing would be something that would be brought up, but everyone just kind of went with it, which I suppose is because they've always lived on a turtle floating through space).
This book is so fantastically random that I'm surprised I liked it - I don't, usually, like books that seem to be moving nonsensically (I in fact am very vocal about having proper rules controlling your magic in your universe, usually). But something here made this book fantastic. There's something about Pratchett's writing that is fun, but not simple, quirky but not annoying, and also very refreshing. This whole book was very refreshing to me. It's probably because it seemed like it was written that way on purpose to poke fun at fantasy stereotypes (or ones that were present when he wrote it, anyway).
Besides, it was hilarious. I know not everyone likes puns, but whatever, they are my favourite thing. I don't usually laugh out loud when I read books, but one particular pun had me laughing into my pillow for a good half-hour before falling asleep. (Sadly it did not cause the same response when I repeated it to my friends, who are now demoted.) Terry Pratchett's writing is true a gold mine of quotable material. The character of Death was amazing as well.
I read somewhere that The Colour of Magic is not the best book in the Discworld series, that Mort and Guards! Guards! were better places to jump into it, but I don't regret starting here at all. This book also contains one of my favourite jokes of all time, read it. I for one am off and reading The Light Fantastic.

The Color of Magic serves as our introduction to Discworld. A world a lot like our own, but different. Our view of Discworld is through the eyes of Rincewind, a wizard (sort of), Twoflower, a tourist, as well as the various gods and goddesses whose games and wagers decide the fates of Discworld’s inhabitants. Pratchett’s prose is imbued with wit and satire and this is not your typical fantasy novel. It is the first of a very long running series. Each book in the Discworld series can be read as a standalone novel but there are elements that run throughout the series and groups of books that follow certain characters (a kind of series within a series) that will be enjoyed more if read chronologically. If you enjoyed the Color of Magic buckle up for a long, fantastical ride and see what else Discworld has to offer!

Discworld, a long running 40 series long sharp biting satire on the human condition couched as fantastical hilarious and downright ridiculous fantasy romp. Pratchett, because his stuff is so different, may not be on the radar of the ordinary fantasy fan. But it's a mistake to ignore his works. This man is great a pillar in the fantasy genre and needs to be read.
I'm putting Pratchett on for his entire series some of his books are fantastic, some outstanding, some merely good, but all make for good reads. Taken as a whole, Pratchett's Discworld series is...transcendent. As a whole the sum is greater than the parts; the books taken together are sharp insights into the foibles of humanity.
Pratchett's series shares a lot in similar with Martin's brutal A Song of Ice and Fire series. While Discworld, ostensibly, is a lighter series wrapped with comedy but at the core both of these series explore the idea of civilization and how it changes over time. The difference of course is the direction. Martin's shows how fragile civilization is and how it can easily descend from peace and order to unfettered chaos and violence.
Pratchett, on the other hand, crafts an extended world, one that morphs from the medieval to the modern through the impetus of technology; Pratchett's statement through his works is that technology and social order are highly connected and to have one you must have the other.
Then again,there is also Prachett's satire on the entire fantasy genre, from Dragons,Drafts, Demons, Witches and Wizards to social issues such as the role of women,feminism, racism, and religious tolerance (or intolerance).
And despite Prachett's use of satire and comedy to elucidate on the human condition and his conversation on how technology can push civilization into more enlightened social reform, the man also is able to tell a pretty damn entertaining tale. Many great humorists who use the tale as a medium to express deep thoughts about the human condition get so caught up in the subtext of what they are trying to say that the narrative itself falls flat.
Not so with Terry Pratchett. The man knows how to ride a rip-roaring read funny and at times dark, but still brimming with hope. And yes, he knows how to tell a dammed good tale; not just a funny tale, but a funny tale with some real substance beneath the humor.
Pratchett is one author where after you read one of his Discworld books, you are a better, more developed person after the reading of it. And that my friends is why Pratchett is one of the best fantasy authors in the genre.

Just discovered Terry Pratchett, and this first book made me fan!

This book is one of the finest in comedic fantasy. Terry Pratchett is the Douglas Adams of fantasy and manages to take you on a wild ride that leaves you laughing the whole way. One of my favorite books and a frequent reread of mine. It's also a good place to start if you'd like to start reading his Discworld series, but have no idea where to start.

An odd world, with odd characters, and an odd sense of humour, though oddly this all works. For instance, in this world, the logic we know has been thrown out the window, and is considered illogical, like harnessing the power of lightning, aka electricity. In some ways Rincewind is more like us, and is therefore an apt narrator for us to follow, as he represents the viewer, and questions things like the viewer would. Rincewind's attempts to figure out words are funny, and technically incorrect, and yet are blunt realities of what they describe.
This author is unbelievably good at stringing together random coincidences, in most books they would be frowned upon, but considering the nature of this odd world, they turn out humourous.

It was sooooo funny!

This book was very enjoyable and I fell in love with Rincewind the Wizard. I really love Terry Pratchett's imaginative world he put together and really did not want the story to end. And of course it didn't I just have to read the next book.

If you haven't been to Discworld, this is a trip you need to make. Fantasy lovers will pee their pants laughing at the characters and world that Terry Pratchett immerses you in from page one. What's not to love about a flat world supported by four elephants who are standing on the back of a large turtle hurtling through space?

Start with Colour of Magic and work your way through chronologically, or grab one and enjoy - while there is a little bit of carry through, most stand alone fairly well. No matter what, you're going to want to have an extra pair of pants handy, and to clear your schedule for the day - you won't want to put it down!